Items related to The Art of Palestinian Embroidery 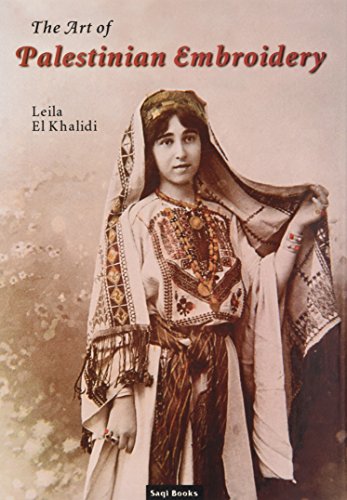 The Palestinian folk arts have a rich and fascinating history. Silk thread and embroidery, together with an expanding repertoire of symbols, are known to have made their way from China to the Holy Land along the Silk and Spice Routes before being introduced to Europe by Christian saints, holy men and pilgrims. Mainly using cross-stitch, Palestinians have continued to embroider their traditional motifs, giving them their own appellations and developing their own terminology. As clothing was of prime importance, Palestinian women wanted something personal, distinctive and handmade. By adopting the traditional styles and motifs of her area, a woman expressed her wish to identify and be identified with her cultural roots. Samples of late-nineteenth to early-twentieth century Palestinian costumes are considered to be representative of folk art at its best.

Through the vicissitudes of war and occupation, Palestinian folk materials have been dispersed, though samples are to be found in published material, in museums outside Palestine and in small private collections. Leila El Khalidi's work in identifying and recording the history and motifs in Palestinian embroidery will be of interest both to craftspeople and to students of folk traditions and is an important step in preserving the Palestinian heritage. The book is illustrated with a detailed appendix showing the principal motifs and with photographs of traditional costumes.

Born in Jerusalem in 1927, Leila Hussein Fakhri El Khalidi graduated from the American Junior College in Beirut before working, from 1943 and 1946, under the Palestine mandate government. From 1971 to 1978 she was head librarian at the PLO Research Centre in Beirut, then joined SAMED (the Palestinian Martyrs' Works Society), founding the Society's Central Library and heading a research unit for Folklore and Folk Arts and Crafts. Her efforts resulted, in late 1971, in recognition of the PLO Research Centre Library as the national library of the Palestinian people, and, in 1986, in the establishment of a folk museum collection within SAMED. At present she is chairperson of the non-profit organization al-Manara for the dissemination of Arab culture, based in Amman.

Shipping: US$ 8.18
From United Kingdom to U.S.A.
Destination, rates & speeds