Items related to The Power to Coin Money: Exercise of Monetary Powers... 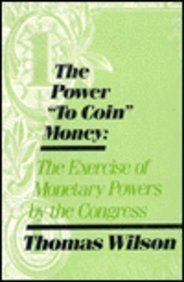 This book traces the history from colonial times to the present of the monetary powers exercised by the Congress under the Constitution. It follows the evolution of the American banking and monetary system from the perspective of specific provisions in the Constitution that authorize the government to coin money and regulate its value. The author critically examines how far the development of the contemporary money and banking system has pushed beyond the narrow powers spelled out in the Constitution. He shows how changes in congressional legislation, Supreme Court decisions on precedent-setting cases, and the evolution of central banking powers within the Federal Reserve System have expanded the scope of the federal government's monetary powers. Yet, the author views this history within the context of private limits to the authority of Congress and the Congress's distrust of lodging the central bank within the Executive branch, preferring instead to respect an independent central banking tradition. The Hamiltonian tradition, he concludes, still offers the best institutional arrangement to confront unstable markets and destabilizing political influence.

1. The Power to Coin Money: The Exercise of Monetary Powers by the Congress

2. The Power to Coin Money: The Exercise of Monetary Powers by the Congress