Items related to Liberalism at work: The rise and fall of OSHA (Labor...

Noble, Charles Liberalism at work: The rise and fall of OSHA (Labor and social change)

Liberalism at work: The rise and fall of OSHA (Labor and social change) 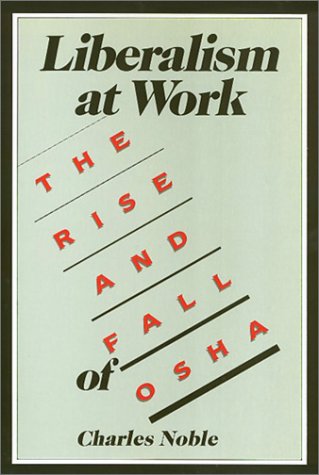 "The Occupational Safety and Health Administration (OSHA) was established in 1971 to protect workers from job-related accidents and diseases by setting standards and enforcing the 1970 OSH Act. It has been attacked constantly, usually by business and sometimes by government, and also by labor... Noble makes a convincing argument, pointing out shortfalls in other theories and the responsibility of all concerned. For those unfamiliar with the political content and debates, Noble provides plenty of useful references. An important contribution to the continuing debate about a more radical, meaningful framework to effect the changes envisaged in OSHA and similar social legislation." --Choice "Noble's broad perspective, extensive scholarship, clear presentation, and reformist sympathies make this book a delightful change from the normal market perspective currently dominating discussions of social regulation." --American Political Science Review "Ambitious, carefully researched, and meticulously written..." --Amicus Journal "Few people are able to combine sympathy for an enterprise with a rigorous and critical analysis of it; Chuck Noble not only accomplishes this tusk but does so in a way that takes us fur beyond his case study of OSHA. He illuminates many aspects of social regulation and, most generally, policy-making in advanced capitalist societies. His perceptions for reform are an exemplary mix of hardheadedness and daring. In short this book is one of the most sophisticated and insightful examples of political economy that I know of." --Jennifer L. Hochschild, Princeton University

1. Liberalism at Work: The Rise and Fall of OSHA (Labor & Social Change)

Book Description Temple University Press,U.S., 1989. Condition: Good. Ships from Reno, NV. Former Library book. Shows some signs of wear, and may have some markings on the inside. Seller Inventory # GRP92869850

2. Liberalism at work: The rise and fall of OSHA (Labor and social change)

Book Description Temple University Press, 1986. Condition: Good. A+ Customer service! Satisfaction Guaranteed! Book is in Used-Good condition. Pages and cover are clean and intact. Used items may not include supplementary materials such as CDs or access codes. May show signs of minor shelf wear and contain limited notes and highlighting. Seller Inventory # 0877224218-2-4

3. Liberalism at Work: The Rise and Fall of OSHA (Labor & Social Change)

4. Liberalism at Work: The Rise and Fall of OSHA.