Items related to Superhero Comics of the Golden Age: The Illustrated... 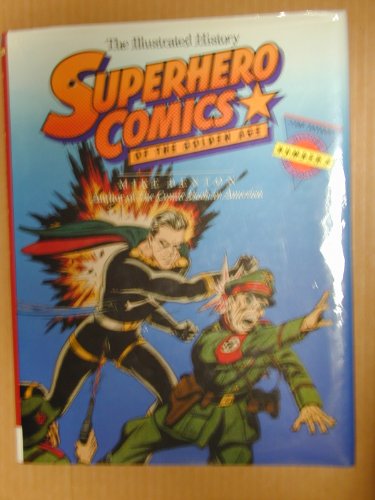 Traces the history of the superhero comics from the early 1930s to the late 1940s, plus profiles of the heros and their artists and an annotated checklist of the comics

It would be nice if Benton's series of comics histories ( Horror Comics: The Illustrated History , LJ 4/15/91; Superhero Comics of the Silver Age: The Illustrated History , LJ 11/15/91; Science Fiction Comics: The Illustrated History , LJ 4/15/92) had some kind of sequence, but the volumes seem to be coming at random. It is especially bizarre that he did the Silver Age (mid-1950s to late 1960s) two volumes before the Golden Age (late 1930s to mid-1950s). The Golden Age set the stage for the majority of comics published for the next two decades: Jerry Siegel and Joe Shuster's Superman, Bob Kane's Batman, and Will Eisner's The Spirit were all created during the Golden Age. Historically, this period covers World War II, one of the most popular eras for superhero comics. Benton's research is impressive: he dredges up some really obscure stuff and uses a variety of interviews and articles as source material. Like the other volumes, it is frustratingly uncritical and only skims the surface of the era, but even that is valuable in such a pioneering time. Recommended for area collections; if you can't afford all the volumes, this is one of the ones you should get.
- Keith R.A. DeCandido, "Library Journal"
Copyright 1992 Reed Business Information, Inc.