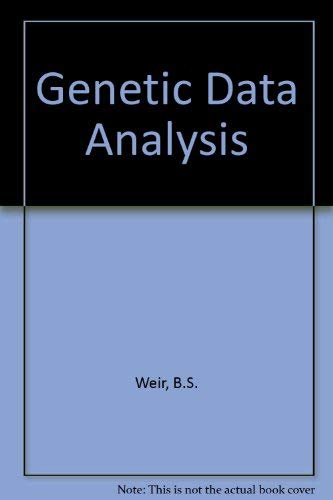 The interpretation of discrete genetic data lies at the heart of population and evolutionary genetics, yet basic statistics courses and texts generally concentrate on continuous variables. In "Genetic Data Analysis" a full account of the methodology appropriate for count data is presented. Starting with the basic idea of estimating gene frequencies, and proceeding through a wide range of topics to building phyilogenetic trees, the book contains the tools for analyzing genetic data on morphological characters, isozyme frequencies, restriction fragment patterns, and DNA sequences. Throughout the book, the importance of clarifying the sampling frame is stressed. For example, if conclusions are to be drawn about a single population, then only "statistical" sampling needs to be incorporated into expressions for variances of genetic parameter estimates. If conclusions are to be made on a wider basis, perhaps about a whole species, then the "genetical" sampling between generations that can cause local populations to differ must also be accommodated. This distinction is becoming increasingly important in the analysis of DNA sequence data, as the ability increases to generate multiple sequences of a particular region.

Book Description Hardcover. Condition: Good. No Jacket. Item is in good condition. Some moderate creases and wear. This item may not come with CDs or additional parts including access codes for textbooks. This may not have a dust jacket. Might be an ex-library copy and contain writing/highlighting. Photos are stock pictures and not of the actual item. Seller Inventory # DS-0878938710-3