Items related to Mussolini As Diplomat: Il Duce's Italy on the World...

Mussolini As Diplomat: Il Duce's Italy on the World Stage 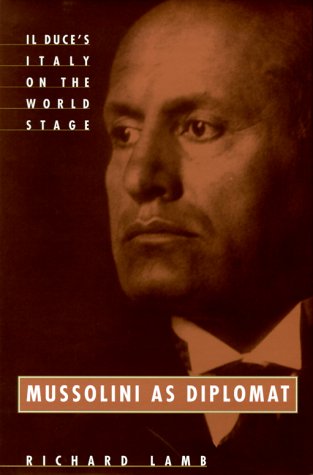 Examining the diplomatic history surrounding Mussolini's rise to power and subsequent partnership with Germany, the author questions the notion that the Axis alliance was foreordained, criticizing British diplomacy as a factor alienating Il Duce from the Allies.

Richard Lamb is an eminent historian with eight books to his credit, including the highly praised War in Italy 1943-1945: A Brutal Story and Montgomery in Europe. Lamb served with the British Eighth Army in Italy during World War II.

A flawed look at Mussolini's diplomacy. This is an American edition of a work published last year in Great Britain. Lamb's controversial thesis: that until the mid-1930s, Mussolini was undecided whether to support Nazi Germany or Great Britain in the inevitable war on the horizon. Lamb (Churchill as War Leader, 1993, etc.) here enters the territory of revisionist history. Most scholars, examining Mussolinis and Hitlers respective ideologies, have concluded that Fascist Italy's alliance with Nazi Germany was inevitable and preordained. Lamb is only partially correct in pointing out that Mussolini was not slavishly tied to any ideology; indeed Mussolini in the 1920s boasted that fascism had no ideology. But this is a misreading. Lamb himself recognizes that Mussolini was quite able to say one thing on Monday and the opposite on Tuesday, but he reads Mussolini's courtship of Britain as earnest fascist foreign policy rather than cynical maneuvering. Lamb contends that a golden opportunity to divorce Mussolini from Hitler's fatal embrace was lost by Anthony Eden; Eden, according to Lamb, felt that Hitler was a man with whom the British ``could do business,'' while Mussolini was no more than a common gangster. He was wrong on both counts. That Lamb is essentially correct in condemning Eden and much of the British Foreign Office does not prove his thesis. A curious aside is Lambs contention, based on a previously published work (Mussolini's Other Woman) that the Jewish intellectual and patron of the arts, Margherita Sarfatti, influenced his foreign policy and early distrust of Hitler. Although there is no denying the tense relationship between Fascist Italy and Nazi Germany, Lambs thesis requires a selective reading of the evidence and a failure to address ideology. It is doubtful that Mussolini ever seriously considered entering the war against Hitler; it was more a question of when and how to enter the war at his side as an equal partner. Revisionist history that fails to revise. (16 pages b&w photos, not seen) -- Copyright ©1999, Kirkus Associates, LP. All rights reserved.

1. Mussolini As Diplomat: Il Duce's Italy on the World Stage

Book Description Fromm Intl, New York, New York, U.S.A., 1999. Hardcover. Condition: New. Dust Jacket Condition: New. 1st Edition. Traces Mussolini's early aspirations for alliance with France and Britain, and his distrust of Hitler, through the development of his later alliance with the Third Reich. Looks at the question of whether the Rome-Berlin Axis was inevitable, or a result of bad diplomatic moves by Britain. xii+356 pages, photos, notes, index. Published @ $30.00. Seller Inventory # 13384

2. Mussolini As Diplomat: Il Duce's Italy on the World Stage

3. Mussolini As Diplomat: Il Duce's Italy on the World Stage

4. Mussolini As Diplomat: Il Duce's Italy on the World Stage