Items related to Uruguay Round: An Assessment

Uruguay Round: An Assessment 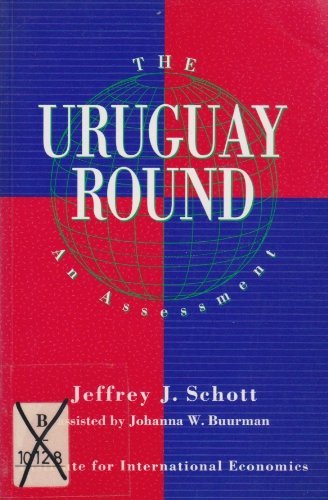 The Uruguay Round was the largest and most important set of multilateral trade negotiations ever undertaken. It will have far-reaching implications for world growth and the evolution of the global trading system into the next century. This is a concise but comprehensive analysis of the key provisions and economic implications of the Final Act of the Uruguay Round. Schott develops a scorecard and grades the results of the negotiations. The sectors and functional areas assessed include agriculture, antidumping, services, investment, intellectual property, textiles and apparel, subsidies, the new dispute settlement mechanism, and other institutional reforms.

Schott's previous book (with Gary Hufbauer), NAFTA: An Assessment, was the definitive analysis of that agreement and played an important role in the US ratification debate. The Uruguay Round: An Assessment will be an indispensable reference for policymakers, business people, and others interested in a balanced evaluation of the results of its eight years of negotiations. It will also be invaluable for teachers seeking to introduce students to the structure and operations of the global trading system.

Jeffrey J. Schott joined the Peterson Institute for International Economics in 1983 and is a senior fellow working on international trade policy and economic sanctions. During his tenure at the Institute, Schott was also a visiting lecturer at Princeton University (1994) and an adjunct professor at Georgetown University (1986–88). He was a senior associate at the Carnegie Endowment for International Peace (1982–83) and an official of the US Treasury Department (1974–82) in international trade and energy policy. During the Tokyo Round of multilateral trade negotiations, he was a member of the US delegation that negotiated the GATT Subsidies Code. Since January 2003, he has been a member of the Trade and Environment Policy Advisory Committee of the US government. He is also a member of the State Department's Advisory Committee on International Economic Policy.

Johanna W. Buurman was a research assistant at the Institute and is a graduate of Georgetown University School of Foreign Service.

Washington's Institute for International Economics has an unsurpassed record of publishing the right study at the right time.

1. Uruguay Round: An Assessment

2. Uruguay Round: An Assessment

3. The Uruguay Round: An Assessment