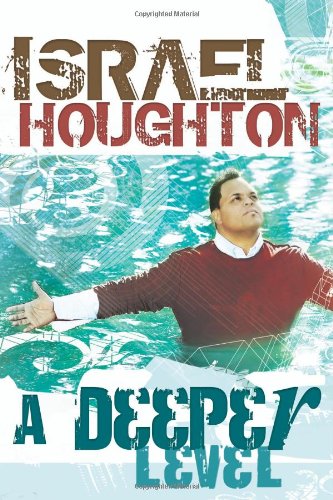 Grammy Award–winning artist and worship leader Israel Houghton and his band, New Breed, invite you to venture with them to A Deeper Level. In preparation for their latest CD release, A Deeper Level (Integrity Music), Israel and his fellow musicians went on a forty–day fast in an attempt to draw closer to the heart of God. What they experienced has been life changing. Now they invite you to go deeper, too.

More than just singing songs and going to church, Israel’s desire is to help you explore what it means to truly live a lifestyle of worship each and every day. Valuable as individual inspiration or as journey to explore as a group, A Deeper Level will help you to:

· take an inventory of your relationships, your calling, and your walk with God
· see the blessings that come through struggle and trial
· experience the power of learning to trust in God
· develop a God–inspired vision for your life
· understand the connection between worship and establishing justice in the world
· be better able to engage in worshipping God anywhere, at any time
· and much more!

“See, I am doing a new thing! Now it springs up; do you not perceive it? I am making a way in the desert and streams in the wasteland.” (Jeremiah 43:19) God is moving and calling His people to A Deeper Level that will stir the soul and take your worship life to a new and different dimension. He beckons you to dive in...and go deep!

Israel Houghton has garnered acclaim as one of Christian and Gospel music's foremost worship leaders, songwriters, recording artists, and producers. Engaged in full–time ministry since 1989, Israel has touched the hearts of millions across the globe through his anointed, God–inspired music.


In 1995, Israel and his wife, Meleasa Houghton, founded New Breed Ministries, an organization comprised of noted musicians and singers who serve within their respective churches and together serve the Church at large.
With a desire to draw people of all races, ages, and cultures together through worship, Israel and New Breed began melding sounds and songs to create music that breaks down barriers and defies categorization. Not an easy task, but it seems effortless for Israel who laughingly describes himself as "a black kid who grew up in a white family in a Hispanic neighborhood."


Together with the vocalists and musicians of New Breed, Israel uses his own multi–cultural upbringing as a reference point. "It's not a white sound or black sound, it's a Kingdom sound," explains the songwriter and producer.


Although their popularity had been growing steadily since the group's inception, they were catapulted into the limelight during 2005 with the release of their gold–certified CD, Live From Another Level. They followed this success with two others––the release of Alive in South Africa in late 2005, and A Timeless Christmas released in the fall of 2006. The accolades continued to flow including multiple Dove Awards and Stellar Awards, a Soul Train Award, and a Grammy Award. The group has also made numerous appearances at high–visibility events including the The Stellar Awards and The Dove Awards presentation shows, as well as BET's Lift Every Voice and Celebration of Gospel, TBN's Praise The Lord, and CBN's The 700 Club to name a few.

All the while, this dedicated group of ministers continues to tour extensively and to serve at their local churches. But, even with such busy schedules, Israel and New Breed have recorded two more CDs Sound of the New Breed: Freedom, a studio album currently in stores, and A Deeper Level, a live CD that released in September '07.

Israel Houghton continues to serve as a worship leader at Houston's Lakewood Church. He and Meleasa make their home near Houston with their three young children.