Items related to Equality Transformed: A Quarter-Century of Affirmative...

Equality Transformed: A Quarter-Century of Affirmative Action (STUDIES IN SOCIAL PHILOSOPHY AND POLICY) 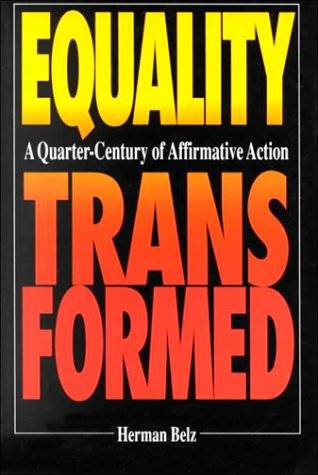 A quarter-century after the enactment of the 1964 Civil Rights Act, its legacy remains controversial. The statutory language intended to ensure equal opportunity to all individuals is now interpreted as authorizing both public and private employers to adopt preferential policies that benefit designated groups based on race and gender. Much the same transformation has occurred in federal contract programs: President Kennedy's executive order that required equal employment opportunity is now understood as mandating minority hiring with numerical goals tantamount to quotas.

Herman Belz's Equality Transformed: A Quarter-Century of Affirmative Action traces this transformation of equality and how it was brought about by courts, regulatory agencies, and activists. The early champions of civil rights sought to eradicate impediments to advancement for the downtrodden; the ultimate aim was to create a truly colorblind society. Over the years, this goal, while still professed, became even more elusive. Preferences, goals, and timetables - "temporary" means for the attainment of a nondiscriminatory society - seemed to undermine that noble quest.

Equality Transformed provides a textured history of affirmative action and its effects upon race relations and our democratic, egalitarian ideals. In recent years, under the impetus of the Reagan Justice Department, the Supreme Court has backed away, however hesitantly, from its earlier sympathy towards race-conscious remedies and preferential treatment. Belz's analysis of recent Supreme Court cases and their antecedents allows us to better understand both the tensions in our society and the fury that the Court has triggered with its recent civil rights pronouncements.

Belz makes a strong case for hewing to a forward-looking rather than a backward-looking approach to eradicating discrimination. Anyone interested in the history, law, theory, or morality of affirmative action in employment will find Equality Transformed invaluable.

Herman Belz is a professor of American constitutional history at the University of Maryland. He has written extensively about the history of civil rights in A New Birth of Freedom: The Republican Party and Freedmen's Rights 1861-1866 and Emancipation and Equal Rights: Politics and Constitutionalism in the Civil War Era. He is the co-author of The American Constitution: Its Origins and Development.

"Critiques the creation and evolution of civil rights policy during the last thirty years. . . . Belz successfully integrates the tale into a piece of sophisticated scholarship and an intelligible whole. . . . [M]andatory reading."

“Belz (University of Maryland) offers a detailed, scholarly, and highly critical analysis of affirmative action since the early 1960s. He argues that while Title VII of the 1964 Civil Rights Act was intended to provide individuals with equal employment opportunites without regard for race, over time, practices by public and private employers that benefit certain groups on the basis of race or gender have become widespread... The book is timely in light of recent Supreme Court decisions that increase the burden of proof faced by employees alleging employment discrimination... Recommended for upper-division undergraduates and graduate students.”