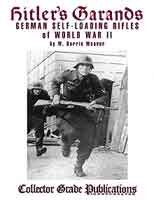 Hitler's Wehrmacht began World War II armed with the bolt action K98k, a rifle only cosmetically different from that with which Imperial Germany had fought the Great War a quarter-century earlier. Then in 1940, the Heereswaffenamt (HWaA, the Army Weapons Office) issued a requirement for a new self-loading rifle. The resulting Mauser G41(M) and flap-locked Walther G41(W) were both hampered by gas-takeoff at the muzzle, which resulted in arms which were overlong, clumsy, muzzle-heavy, unreliable, and consequently unpopular with the troops. Taking their lead from the Russians, Walther copied (and patented) the gas system of the Tokarev SVT self-loader, grafting it onto the flap-locked bolt of the G41 to create the G43, which was only produced during the last nineteen desperate months of World War II. The collecting of the G/K43 and its accoutrements has become very popular in recent years, with very high prices being realized for these rifles and their accessories. This has created a burgeoning industry in "reproductions" for the collector market. In response to this the author has gone to great pains to illustrate the many fraudulent markings seen on components and scopes, and to identify the many out-and-out fake magazine pouches, stocks, and especially scope cases and mounts, which abound today. Spurious these may be, but cheap they are not; and this chapter alone is well worth the price of the book.