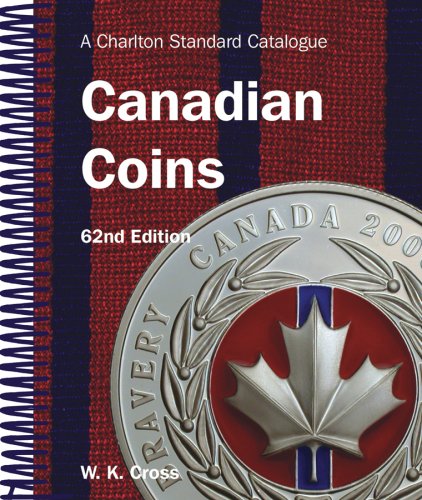 The 62nd Edition of the Charlton Standard Catalogue of Canadian Coins will be officially released at the Canadian Numismatic Association convention in Niagara Falls, July 13, 2007. Two major trends are unfolding in Canadian numismatics, one is the renewed interest in variety collecting, the other is the growing interest in high grade modern coins. In the 62nd edition of Canadian Coins we are tracking both these trends. The Varieties Section covers 100 pages on Victoria twenty-five cents. The modern coins are covered by the utilization of a series of pricing tables first introduced last year in the 61st edition. The die varieties are straight forward, it is the modern issues that have become one of the most confusing sections of Canadian Numismatics. This all began in 1954 when the Royal Canadian Mint offered a six-coin set with a superior finish (superior to the circulating coins of the day) to collectors. There was a reluctance on the part of the Mint to assign a name to their new offering. This reluctance was never really overcome, however, in the Annual Mint Report for the year 1961 they mention uncirculated coin sets are now sold in sealed plastic containers. Over fifty years later the description of the offering has not changed, but the quality of the coins in the offering has varied greatly. This variation in quality between coins sold to collectors, or coins produced for circulation did not exist in the silver era, but in 1968 with the substitution of nickel, the difference between circulating and non-circulating began to blur. We have a problem in that a collector who wishes mint state business strikes for their collection cannot distinguish mint state uncirculated coins from those removed from packaged sets issued by the Mint. It has fallen to the Canadian Grading Services to find a solution to this problem for it is their responsibility when asked by a collector to correctly identify and grade submitted coins. They have to identify and name the finish on the coin: Mint State Business Strike (CLT), Mint State from packaged sets (NCLT), Specimen or Proof. There are two grading companies in Canada, and both have a different terminology when grading coins. When describing coins removed from uncirculated sets from the Mint, ICCS uses the term Numismatic BU, while CCCS uses UNC. The market place eventually will decide which term it will accept. For the present time The Charlton Press has built into the pricing tables for modern coins (1968-2007) two mint state blocks. The first deals with business strikes MS-63 C, MC-64 C and MS-65 C, with the C signifying circulating coinage (CLT). The second block covers MS-65 NC, MS-66 NC and MS-67 NC, with the NC signifying non-circulating (NCLT). The variation in the grade range between the two blocks underlines the scarcity factor between high grade business strikes and high grade Mint product. Note on Grading Services We have centred on Canadian Grading Services for the sole reason they offer a product more suitable for the Canadian collector. The United States services do an excellent job, but for economic reasons which are very valid, do not deal with the idiosyncrasies of the Canadian market.

Buy Used
Condition: Fine
The book is unread and clean. Edges... Learn more about this copy

Book Description Charlton Press, 2007. Soft cover. Condition: Fine. The book is unread and clean. Edges are sharp and fine. No tears or creases. No stains, writing or reminder marks. The binding is straight and tight. Light rubbing at the corners; price intact; no interior highlights. Once your order has been confirmed and payment received, your order will then be processed. The book will be located by our staff, packaged and dispatched to you as quickly as possible. Seller Inventory # 016416