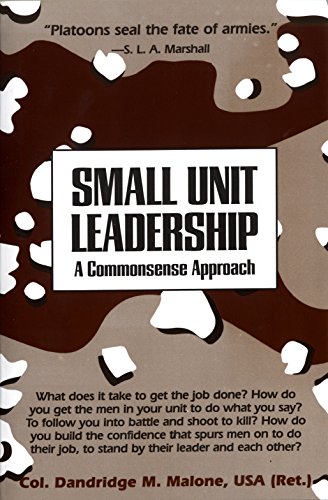 Required reading for all present and future leaders, this classic is for those who have to "get the job done"--military or not.

Col. Dandridge M. (Mike) Malone, US Army (Ret.), began his army career as a private and ended as a colonel almost 30 years later. During that time, he earned a BS degree from Vanderbilt University and an MS from Purdue, and graduated from the Army Command and General Staff College and the Army War College. Renowned as the army’s leading expert on leadership, both in garrison and in combat, he has taught the subject to noncommissioned officers, West Point cadets, and students at various army service schools to include the Army War College. An audiotape he prepared on leadership, Soldier, has some 50,000 copies in circulation among army troop units worldwide. He died in 1995.

The Purpose of Small-Unit Leadership

On the battlefield. That’s where it is that you—Captain, Lieutenant, Sergeant—will do what it is our Army meant for you to do when you were offered the chance to become a small-unit leader.

The mission of the Armed Services is to defend this nation. Our Army’s part of that mission is to fight the land battle. Your part of the Army’s mission is to lead soldiers and small units during that battle. As a troop leader, that’s what you’re for and why you are. Your ultimate purpose is to lead. Troopers. On the battlefield.

As you study this leadership book, you will see many examples from the combat arms. But this book is not just for the combat arms. It is designed for use by all small-unit leaders in all kinds of units. “How to lead” doesn’t change that much from one kind of unit to another. The missions may vary and the situations may vary, but the central responsibilities of leaders in a rifle company are not all that different from the leadership responsibilities of the leaders in, say, an MP company. If and when war comes, our whole Army will be “on the battlefield.”

As you’ll see in a moment, this book will describe vividly the demands of the battlefield. But most of this book will describe how to prepare for that battlefield—how to prepare yourself, your soldiers, and your unit before the battle begins. The reason for this emphasis is pretty simple. Performance during battle is like the tip of an iceberg. It requires a whole lot of support—under the surface, behind the scenes—before the first round is fired. And the outcome of any battle is determined, with few exceptions, by how well soldiers and units and their leaders were prepared. Individual heroic actions can sometimes turn the tide of battle, but the real key to success on the battlefield, in any army, at any time, has always been well-trained soldiers in well-trained units. The message here should be clear. As a small-unit leader, you should only be doing one of two things:

· PREPARING SOLDIERS AND SMALL UNITS TO FIGHT THE BATTLE

This book was written for company-level leaders, for those who wear the green tabs. For you, Captain, and for you, Lieutenant, and for you, Sergeant. It is a guide, a “road map,” to help you build small units that can destroy and defeat small enemy units. The challenge is immediate. We don’t know where or when that next battle will be fought. But we know, from history, that the battle will come. And it could come anytime, at a number of different locations. Building battle-ready units must be your number one priority, starting now.

Task, Conditions, and Standards for Leadership

The objective of this first chapter is to give you the “big picture” of small-unit leadership. Once you get a handle on that, the later chapters will begin to lay out specific leadership techniques and tools and “tricks of the trade.” With some idea of the big picture, you can then see how all these techniques and tools “fit together” to give you what you need to lead.

There is an easy way to understand the big picture: three words. If you’ll listen out across this big Army of ours, and if you’ll listen at small-unit level, you’ll hear leaders using three words that were seldom heard just a few years ago: TASK, CONDITIONS, and STANDARDS.

These are not just “training” words. They are also leadership words. Put together the right way, they describe very clearly what’s expected of you as a leader.

The whole purpose of leadership is simply to accomplish a task. That may sound too simple, but that’s what a leader is expected to do. He gets a TASK in the form of a mission or order, and then he gets that task done through the efforts of his followers.

Political leaders, community leaders, and even scout leaders are all like you, to some extent. All of you try to put people and things and time and effort together to accomplish a task. The big difference is that you are an Army leader. What that means is that, in the final analysis, you must be ready someday, somewhere, to lead soldiers to accomplish an ultimate task that no one else wants to do, under conditions that no one else wants to tolerate. Small-unit leaders of the combat arms will usually lead this ultimate task—but any of us might someday get the call, no matter what our rank or branch or MOS.

This ultimate task is what makes you as an Army leader so different from all those other leaders. It’s also the essence of being a “soldier.” It underlies the meaning of “service” as well, and it is the underpinning of the whole idea of military “duty.” All these things mean being ready to give up freedom, and even life, for the sake of our nation and its people, in what has been called “the noblest act of mankind.” At bedrock level, that’s what Army leadership is all about. And that’s why Army leadership is so important. An awesome responsibility.

To accomplish a task—that’s your purpose. You have done or will do this a thousand times, in response to orders direct, or implied, or trained into you. Orders that come down to you through the one thing that links all our leaders together—the chain of command. The chain of command controls, coordinates, and supports. It also challenges. Think about that time when “leadership” and “soldier” and “service” and “duty” will all come together, when the chain of command will give you that ultimate task to accomplish, when it will say to you, “Attack!”

The artillery shifts, and small-arms crack, and men tremble, and the platoon tenses for the final assault up the hill. You give the signal ... and they go. Why is it that John T. McFerren, soldier, U.S. Army, obeys your order? Leadership, or followership? Neither. It’s both. Listen.

John T. McFerren assaults up into this kill-or-die situation because

McFerren assaults for any, or all, or some combination of the above reasons, or for some other reasons not listed. If you had the expertise and the right psychological model, you might somehow figure out the “why” for McFerren, but next to him there’s Johnson and Allen and Brown. They go too, and each for some different pattern of reasons which neither you nor they will ever know—but they go. They go because at that critical moment in time, when each will wrestle briefly with the decision of whether to attack or hide, attacking is their best choice. You, as the leader, first out, first up, and out front show them that this is so. And so they go. They follow you. You lead. And that’s your TASK.

Book Description Presidio Press, United States, 1983. Paperback. Condition: New. Language: English. Brand new Book. Required reading for all present and future leaders, this classic is for those who have to "get the job done"--military or not. Seller Inventory # AAC9780891411734