Items related to Jungle Dragoon: The Memoir of an Armored Cav Platoon...

Jungle Dragoon: The Memoir of an Armored Cav Platoon Leader in Vietnam 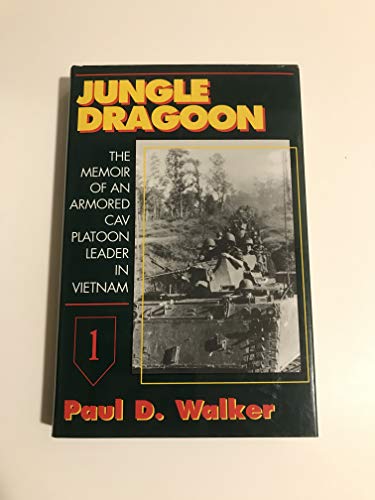 Replete with the coming of age insights and leadership lessons that have made books like Platoon Leader perennial favorites, Jungle Dragoon delivers an exciting story of living on the edge, living in battle.

A blood-and-guts, shoot-em-up memoir of Vietnam, from the fairly unusual perspective of an armored cav platoon (tank squad, for the yet-to-be-drafted crowd) officer. Walker, aged 23 and fresh from college, was sent to Vietnam in the mid-1960s and was quickly absorbed into the famed 1st Infantry Division of the US Army, a.k.a. the ``Big Red 1.'' While most of his memoir focuses on the specific experiences of the armored cavalry, Walker is at his best when describing the daily routine of soldiers at war, as well as the welcome escapes from routine, such as a quick Christmas break from action to attend a Bob Hope performance. While Walker tends to digress with trite observations (``Bob Hope was not just an actor but an enduring symbol of America's appreciation for its servicemen''), his writing has a workmanlike character that gets his points across and carries the narrative through the flat spots until it reaches the next exciting point, such as the numerous action scenes, which Walker describes with gusto. Its unfortunate that he never manages to place his own experiences into a larger context of the war as a whole, particularly as he served during one of the pivotal stages of the war, when American involvement was reaching new levels of commitment every day. Also unfortunate is Walker's use of outdated, clichd images, such as his description of a Vietnamese barber as a ``grinning, gold-toothed tradesman,'' and even worse is his ending, a forced epilogue recounting one of his recurring postwar bad dreams. Alas, just another memoir that is likely to give many readers a sense of dj... vu. (photos, not seen) -- Copyright ©1999, Kirkus Associates, LP. All rights reserved.

The latest of Presidio's superior military memoirs reports the Vietnam experience of a career armor officer whose first combat was as leader of a platoon of M-48 tanks with the 1st Infantry Division in 1966. Walker faced not only formidable obstacles of terrain and stubborn opposition well provided with antitank weapons but also his superiors' doubt that armor had a place in Vietnam, which was manifested by failures in logistical and personnel support. He tells the vivid, moving story of how his unit survived and vindicated armor, inflicting more damage than it suffered. He also pays tribute to the men under him, politely damns uncooperative superiors, and doesn't withhold respect for the capabilities of the enemy when fighting on terrain and at times of his choice. Walker's book, the first platoon-level account of tank combat in Vietnam, is likely to rank permanently high among junior leadership and military coming-of-age stories of the Vietnam generation. Roland Green

1. Jungle Dragoon: The Memoir of an Armored Cav Platoon Leader in Vietnam

2. Jungle Dragoon: The Memoir of an Armored Cav Platoon Leader in Vietnam

3. Jungle Dragoon: The Memoir of an Armored Cav Platoon Leader in Vietnam

4. Jungle Dragoon: The Memoir of an Armored Cav Platoon Leader in Vietnam