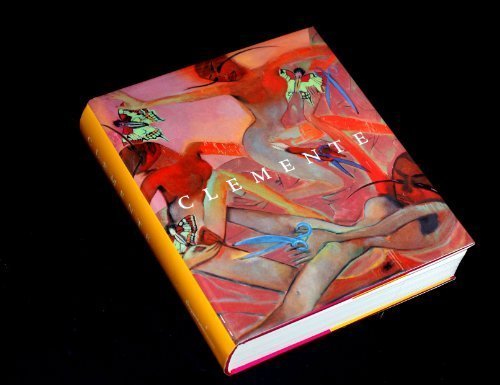 Francesco Clemente (b. 1952) has, since the 1980s, been a leading artist in the international revival of expressionist figure painting and sculpture. Clemente's subjects -- rooted in both the physical and the surreal, spiritual worlds -- create a vast body of work that appeals to diverse audiences. This stunning book is published to accompany a major retrospective exhibition.Clemente draws upon a pan-historic web of impulses, mediating among the myriad cultures of the ancient Mediterranean, Byzantium, Europe, India, and America. Stylistically his work recalls the Italian Renaissance, Indian miniatures, European Romanticism, Abstract Expressionism, and Pop Art. Clemente's widespread cultural interests and nomadic lifestyle -- New York is his home but he spends part of each year in Italy, India, and the New Mexico desert -- have deeply affected his art.

This finely wrought, lush, 500-page volume does justice to the wide-ranging oeuvre of one of the most open-minded, ambitious, and productive artists of the late 20th century. The catalog of an exhibition at New York's Guggenheim Museum in the fall of 1999, it contains a wide range of writings, including Robert Creeley's haunting poetry, a thorough chronology, and half a dozen essays, including the introductory "Once You Begin the Journey You Never Return," by the Guggenheim's Lisa Dennison. In accordance with Clemente's paintings and drawings, the book touches on themes from Indian mysticism, prayer, the body's pores and orifices, family bonds, and a number of metaphysical and physical concerns, being and nothingness among them. In the essay "Rooms," Francesco Pellizzi draws a long thread through cave painting, Meister Eckhart's sermons on the soul, Renaissance Rome, and Clemente's wall paintings to arrive at "the transmodern sense of a shifting place of origin; every step, every station, is the first and last in this vortex, a maelstrom animated by an eros that is enveloping and inevitable but also, in the end, joyous...."

Clemente's art, which lays bare his obsessions with sex, self, and spirituality and explores them with a constantly surprising range of intense color and formal invention, stands in bracing, deeply pleasurable opposition to the desiccated, design-bound, theory-driven work that has dominated so much art of the last 25 years. Art historian James Elkins has described making graduate students copy, stroke for stroke, works by Monet and other painters, to give them a feel for "What Painting Is" (as he titled his recent book). Clemente raises the stakes a notch, demonstrating what painting might be, if we were to allow ourselves to be drenched in its myriad possibilities. --Peggy Moorman

Francesco Clemente was born in Naples, Italy, in 1952. After studying classical languages, literature and architecture, he turned to art in the 1970s. Although he has spent a great deal of time since the early 1970s living and working in India, he has made New York City his primary residence since 1981. Clemente has been the subject of many major solo exhibitions, including several international traveling retrospectives. He is famed for his many collaborations--with artists such as Jean-Michel Basquiat and Andy Warhol, and poets like Allen Ginsberg, Robert Creeley and Rene Ricard.