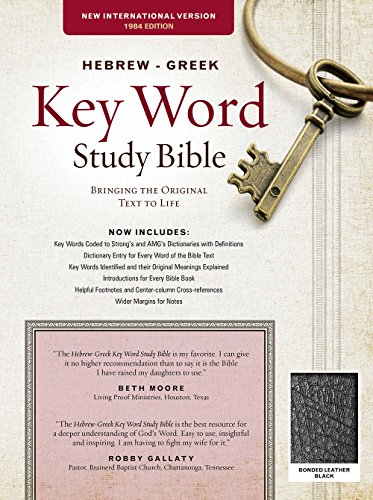 There are times when a Greek or Hebrew word has a distinct meaning that seriously affects the proper interpretation of Scripture. Unless you are familiar with these languages, you will not be able to determine what word in the original text was used or the differences between these words-until now.

The Hebrew-Greek Key Word® Study Bible identifies the key words of the original languages and presents clear, precise explanations of their meaning and usage. Those who love God's Word will treasure this Bible, for it contains a whole library of biblical helps within its covers.

* Wider Margins on Pages of the Bible Text

* Key Words in the Biblical Text Coded to Goodrick/Kohlenber Numbers

Dr. Spiros Zodhiates received his Th.B. degree from the National Bible Institute in New York, and his M.A. from New York University. In 1978 he earned his Doctor of Theology degree from Luther Rice Seminary in Jacksonville, Florida. He is also the recipient of several honorary doctorates.Dr. Warren Baker is the Senior Editor of AMG Publishers in Chattanooga, Tennessee. He holds several degrees: B.A., Clearwater Christian College; M.Div., S.T.M., and D.R.E., Faith Theological Seminary.He served as Assistant Professor of Old Testament at Faith Seminary until he began his career in Christian publishing nearly twenty years ago.

"The Hebrew-Greek Key Word Study Bible is my favorite. I can give it no higher recommendation than to say it is the Bible I have raised my daughters to use."

Book Description Condition: Fair. Independent family-run bookstore for over 50 years! Buy with confidence! Book is in acceptable condition with wear to the pages, binding, and some marks within. Seller Inventory # bk0899577563xvz189zvxacp