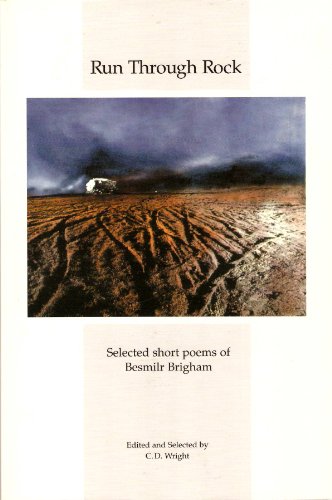 Poetry. Selected and edited by C. D. Wright. RUN THROUGH ROCK is a humble yet unparalleled contribution to 20th century American poetry, a recuperative selection of a radically eccentric poet's work. Selected, edited and reverently framed by poet C.D. Wright, Besmilr Brigham's voice is here codified in its own volume for the first time since 1972; a voice "autochthonous, primally so," Wright notes in her Preface, "Thus, an American poet was 'heaved from the earth,' and occupied her numbered days shaping a rock-hard sensibility of extreme independence." Brigham's poems transcend multiple spheres of cultural, economic, ecological and literary borders. She lived nearly three decades out of a station wagon with her husband and daughter, driving through, camping and living in America, "America, to me, is from certainly the edge of the Arctic circle... all the way down to the (well, whatever it is) Patagonia! to the tip of Chile, jutting out into the sea. An old old world before anything like the US came upon or into it. It is the great land mass" (Brigham in a letter). This poet was a woman from the "deep" and rural South, "a poet of the natural world, not in the pastoral sense but in the habitual sense... The writing is odd both on the surface and below; it never quite yields its oddness, however commonplace the subject. Punctuation is... eccentric but deliberate... her poems are her five senses. Living and dying are the time honored themes, but very much in the act of, rather, the process of, and always with unaverted eyes."—from the Preface by C.D. Wright

Besmilr Brigham (1913-2000) raised by farmers in the Rio Grande Valley of Texas, studied at an all women's Baptist college, married a linotype operator, Roy Brigham, with whom she raised a daughter, Heloise, and began writing seriously in Arkadelphia, Arkansas under the influence of John Gould Fletcher. She traveled alone by freighter in 1948 to charred Europe, of which she wrote her first novel, KATH: the wicked saint. Returning, she instilled in her family a frugal life of unconventional journeys and relentless writing. From 1950 to the late 70's they traveled by car to, and lived in, Nicaragua, Nova Scotia, Alaska, Honduras, Guatemala, Mexico, returning to the U.S. to work. Brigham wrote prolifically, on her own terms, "putting away manuscripts," publishing nothing until the influential bi- lingual journal, El Corno Emplumado, requested her serial poem "Yaqui Deer" in 1966, followed by a decade of concentrated publishing efforts and solicitation. In 1972 Alfred A. Knopf published heaved from the earth, a collection of poems she had worked on for 20 years. The final decades of Brigham's life were of isolated yet conclusive labor over her life's writings in rural Arkansas. A volume of her short poems, RUN THROUGH ROCK (Lost Roads), selected and edited by C.D. Wright, was released in 2000, shortly after her death.