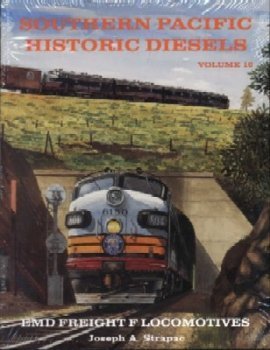 Southern Pacific Historic Diesels is a series of pictorial histories defining the growth and development of the Southern Pacific's fleet of diesel locomotives. The goal of this series is to publish and present in text and photos a record of Southern Pacific dieselization since the fleet's beginnings in the late 1930s. All Southern Pacific Lines freight F-units are discussed in this volume, including the Cotton Belt FT and F7 fleet and the Texas & New Orleans F3, F7 and F9M locomotives. Photos range from factory views when they were new to dismantling them after they were retired. A full chapter is dedicated to cab units that survived under new ownership, including museums from Connecticut to Texas to California. Another chapter illustrates the B-units still on the Union Pacific roster-saved to power rotary snowplows in the Sierras and Cascades. Each major group has a chapter of its own. Photographs illustrate the locomotives at work from Illinois to Oregon. Includes 112 pages (larger than previous volumes), more than 250 photographs (including many detail photographs for modelers), diagrams, tables, assignments and an extensive 2 page roster.