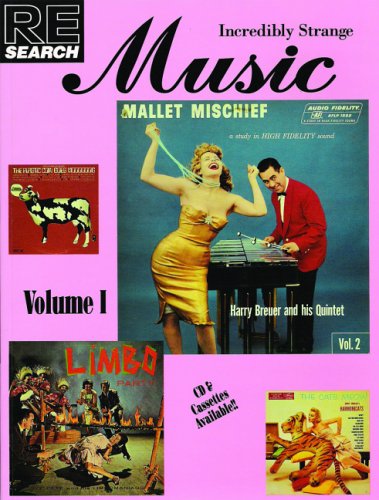 Music. Cultural Studies. In the new INCREDIBLY STRANGE MUSIC, VOL. 1, the editors push way beyond the cheesy TV-celebs-do-pop-faves LP's beloved by garden-variety music cultists. Less a practical guide than a treatise on the philosophical underpinnings of such ephemeria. -- Rolling Stone.

Incredibly Strange Music explores the sonic territory of vinyl recordings (mostly c.1950-1980) largely neglected by the music criticism establishment. Classical, opera, jazz, blues, rock and international music have their specialized critics and publications, but many amazing recordings seem to have escaped critical attention. Often transcending notions involving technical expertise and "good taste," these records defied categories and genres; as a consequence they "fell into the cracks" and are unlikely to be reissued on CD. In record stores they were classified under: easy listening, promotional, novelty/comedy, religious, soundtracks, spoken word, children, celebrity, as well as instrumental headings like accordion and organ (however, whistling, harmonica, and theremin records could be anywhere).

When high-fidelity stereo was first introduced, it immediately inspired an enthusiastic audience for imaginative stereo recordings-many of which are celebrated in this book. During these "golden years" (1955-1965), a huge buying public supported labels like Omega, Audio Fidelity, Command, and RCA Victor's Stereo Action series, enabling them to explore the frontiers of sound effects, percussion and "foreign" music toward the goal of providing amazing entertainment. Many of these LPs had gorgeous, colorful covers which were themselves (framable) works of art. An incredible spectrum of genre-busting and experimental records were produced.

In the '50s when people began settling into boring suburban housing tracts, there sprang up a deep longing for the exotic. In the early twentieth century, Hawaiian music had inspired a ukelele and steel guitar craze, and after World War II, servicemen reminiscing about their days in the Pacific eagerly embraced the "tiki culture" fad (backyard luaus, tiki bars, hula hoops, Hawaiian shirts, and the hula dancing rage taken up by housewives). At a time when sexuality was most repressed and hypocritical, the phallic symbol of the tiki was planted in backyards by thousands of all-American families. "Import" dance crazes such as the mambo, the cha-cha, the merengue, the belly dance, and the bossa nova also leaked sexuality into our puritanical American society. Just as a dream cloaked in symbols can reveal what we have unconsciously suppressed, so music can expose unsurfaced longings and desires and thus grant unexpected insights into our culture.

In search of amazing endangered records as well as insights as to their genesis, we interviewed not just original musical innovators (who once experienced fame), but trailblazing collectors who, without benefit of discography or reference guide, went out into backwater flea markets and thrift stores to search through that which society has discarded. Experiencing the thrill and adventure of the hunt, they made their selections and then listened for hours to ferret out exceptional recordings. Through their discriminating eye we view what they select and gain a deviant perspective; by their inspiring eloquence and love of their subject, the records take on fresh significance. These pioneers link one recording to another and create genres where none previously existed. The act of an individual creating their own categories and evaluations for any cultural field constitutes a dismantling of the status quo's control system which rules our lives and perceptions through implanted "aesthetics"-what society deems good or bad (highbrow or lowbrow). Nothing-especially art-exists in and of itself, but always in relation to its context. Each generation rediscovers and reappraises artistic or cultural phenomena as historical perspective changes. (Unfortunately, much of the music mentioned here won't be preserved for future rediscovery-it was never printed on sheet music, the master tapes have probably been lost, and when all of the vinyl albums wear out, it'll be gone forever!)

In an age of information overload, the mere act of wading through and deciphering society's discards becomes a political act. By the process of selection based on personal observation as to what gives them entertainment and pleasure, the collectors subvert the invisible, tight reins by which society controls us; additionally, they aid us in developing our own aesthetic about pop culture phenomena. When one hears their enthusiasm and their philosophical justifications, one also hears multiple levels of irony as well as nostalgic associations. Thus these records become more than a consumeristic product; they become a reflection of the collector's inner vision and express an alternate aesthetic philosophy. (Note: this kind of activity does not have to be restricted to records-we are in an age where recycling is of paramount importance. In this complex society which has produced so many permutations of "culture," there will always be new uncharted areas that are cheap and accessible to anyone possessed of a discriminating eye. Whether it be "exotica" music or "B" movies or '60s "adult" paperbacks, there will always be a realm that is overlooked and abandoned by society-that has escaped the eye of the academic, the critic and the antique dealer.

The pleasure which music can provide is very important to our well-being. In our Calvinist society with its Puritan underbelly, pleasure is a political statement and has always been a destabilizer of the power structure which has implanted an anti-pleasure work ethic. Inherent in our culture is the idea that if something is fun, it can't be art or important. (Conversely, if it's boring, it must be high art!) Behind everything pleasurable a punishment lurks; even in a subculture where the term "high brow" has been replaced by the terms "cool" or "hip," there still remains a guilty underpinning that a record you love has to be esoteric or rare; you have to earn your pleasure-it can't be easy. To hearken back to Emma Goldman: what's the point of a revolution if you can't dance to it?-Andrea Juno & V.Vale