Items related to Howdy, Sucker! What P. T. Barnum Did in Colorado

Howdy, Sucker! What P. T. Barnum Did in Colorado 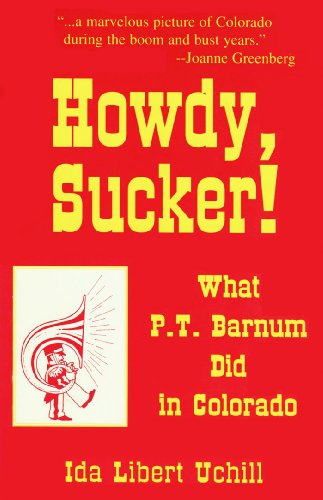 A summary of Barnum's life includes that he was born in 1810, when the population of the United States with seven million, and died in 1891, when it had increased ninefold. His face was as famous as that of Abraham Lincoln, or of Queen Victoria, whom he entertained in her palace. Just museums featured "freaks," a beloved elephant, Jumbo, and he brought Jenny Lind, the Swedish nightingale, to perform in concerts. He perpetrated hoaxes beginning with Joice Heath, the ancient "nurse" of George Washington, and he brought to prominence the miniature man, Tom Thumb. Fires and other disasters destroyed his enterprises, but he recovered from them to the astonishment and approval of the public. His lectures on temperance, on how to be successful, and his use of sensational advertising - ballyhoo - influenced a young nation. He espoused liberal causes such as the abolition of slavery, women's rights, and the elimination of capital punishment. Less well-known, was that he was a charter member of the idealistic colony guided by Horace Greely, the editor of the New York Tribune, and his agricultural editor, Nathan C. Meeker, and-pertinent to his activities in Colorado-that his daughter had left her husband and married in ailing doctor. The show man was sixty when he appeared in nine-year old Colorado Territory in 1870. Like the rest of the West, it was a magnet especially during the "Pike Peek or Bust" gold rush of 1859. Heavily represented among the gold-seekers were land developers to whom every bit of occupied land was a personal challenge.... Barnum, who visited five times for short periods, left an enduring impression on Colorado. From letters and documents, I learned that there was more to Barnum than mud. --- excerpts from Prologue

1. Howdy, Sucker! What P. T. Barnum Did in Colorado

Book Description Paperback. Condition: Good. Item is in good condition. Some moderate creases and wear. This item may not come with CDs or additional parts including access codes for textbooks. Might be an ex-library copy and contain writing/highlighting. Seller Inventory # DS-0960446818-3

2. Howdy, Sucker! What P. T. Barnum Did in Colorado