Items related to Kanji Pict-O-Graphix: Over 1,000 Japanese Kanji and... 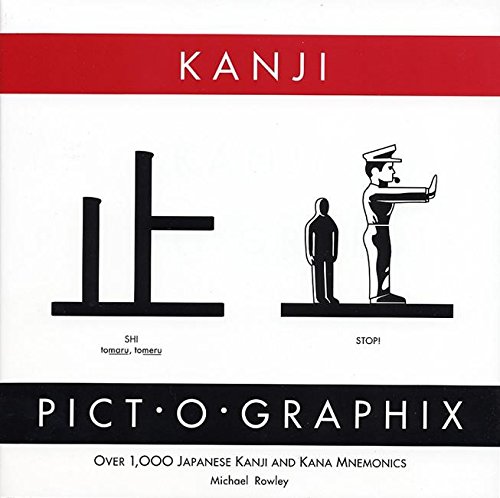 "A fun book for studying kanji. The illustration reveals more of its contents and method than any description ever could."—Japan Times

"It is a very nice book, simple and pretty effective. A useful addition to the library of all beginners who aspire to learn Japanese. Recommended."—Protoculture Addicts

How does one learn kanji, the characters of written Japanese? The traditional approach is rote memorization. Japanese children write each kanji hundreds of times at their desks, and eventually they are acquired. Michael Rowley offers a different way, a mnemonic-association approach that provides a hook on which to hang the meaning and retrieve it easily when the kanji comes into view. The concept is simple: each character is represented under the word or concept it stands for (such as turf, bamboo, eat, or duty), followed by the pronunciations of the word in Chinese and Japanese, and a drawing that captures the meaning and resembles the character enough so that it'll come to mind whenever the kanji is seen.

Organized thematically in chapters such as "Power," "Places," "Tools," "The World," "Food," "People," and "The Body," Rowley's book lets you learn the root symbols before teaching the words that add to them for further meanings. For example, the character for water is a splatter of three dashes that Rowley pictures as three splashing water drops. Later, you see that steam, float, boil, dirt, and bathe all build on the water character. For steam, there's the water character plus a series of lines that Rowley exaggerates to resemble swirling, vapory tendrils, and the association helps. Building on units of memory and relationship, recall is aided considerably by the simple yet evocative drawings. Rowley even manages to help with the hiragana and katakana syllabaries, providing appealing pictures that look a bit like the letters in question and begin with the same sounds. So the na letter looks like a knot, nu resembles Rowley's drawing of noodles held by chopsticks, and it's easier to remember which symbol means te when you picture a telephone pole.

It's hard to do Rowley's book justice with words, since the visual element is what makes it tick. He does a wonderful job, blending insight, imagination, and drawing technique, in a book that far surpasses the old rote method, making kanji learning both appealing and accessible. --Stephanie Gold

Michael Rowley is an illustrator and graphic designer living in the San Francisco Bay Area. He is also the author of Kana Pict-o-Graphix.

Book Description Paperback. Condition: New. Paperback. Kanji Pict-o-Graphix offers an engaging way to learn and memorize Kanji.-Rocky Mountain Region Japan ProjectA fun book for studying kanji. The illustration reveals more of its contents and.Shipping may be from multiple locations in the US or from the UK, depending on stock availability. 216 pages. 0.494. Seller Inventory # 9780962813702