Items related to Wicked Words: Poisoned Minds--Racism in the Dictionary 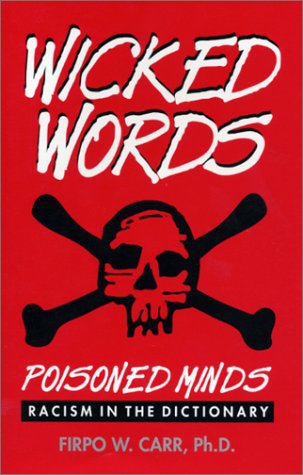 This book exposes and classifies racist words found among the 160,000 words in Webster's Ninth New Collegiate Dictionary. Other versions of Merriam-Webster dictionaries (as well as other prominent English dictionaries) are also examined and critiqued. This comprehensive work is the result of a 25-year study by the author, but has been skillfully reduced to a relatively few pages. Though detailed, it is written in easy-to-understand English with the offending words alphabetized and catagorized. Ancient words of wisdom grace the beginning of each chapter. The book comes complete with footnotes, subject and word indexes, appendices, and illustrations.

The author is an internationally known Bible scholar and linguist. He teaches at the University of California at Los Angeles (Extension) and the University of Phoenix. He has studied and photographed Hebrew manuscripts in both Israel and the former Soviet Union. With a grant from IBM he used the latest in computer technology to study ancient biblical and extra-biblical manuscripts. His work and efforts have been praised in the Los Angeles Times, the internationally acclaimed Biblical Archealogy Review, as well as a host of other newspapers and magazines.

"His book is a must read on the subliminal ways that racism exists in this country."--Robin Watson, an attendee at a book signing. -- L.A. Watts Times, March 6, 1997

'Dr. Carr's book, a well documented expose, is not only a remarkable achievement, but is the wave of the future with regard to style of publishing.' -- Prof. Jack Languth, Chair, USC School of Journalism