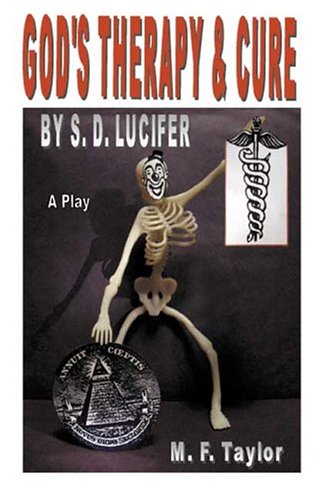 In Act I of the play, not realizing he is god, and suffering from amnesia and other psychiatric problems, General Peti is confined to what he thinks is a military mental ward, in therapy with Dr. Fag, alias Lucifer.

Dr.Fag attempts various means, some questionable, in order to recover God's memory. We learn not only that God is missing in action but that the Earth Play, full of war and greed, has become melodramatic and needs better scrips, requiring a mutation in species (from Homo sapiens to Homo novus); like Lucifer engineered in the Garden of Eden Play. In addition, dr. Fag suggests he wants better press, his own play, and historical clarification of his role.

General Peti's memory seems to flash on and off regarding his identity as God in a variety of dreams, with which Dr. Fag attempts analysis. Dr. Fag's apparent assistant, the Nurse, increasingly reveals that Dr. Fag's therapy is limited, and she begins to have a more assertive role in the process. We discover the Nurse is actually the Great Goddess who assumes a variety of roles in the play as Nurse, Kali, and Shakti (and has also played roles as Eve and the Great Mother), and takes over this Dream Play, becoming instrumental in God's recovery.

We learn in Act II that God's Therapy takes place in Heaven's Dungeon, at the Academy of Gods in the Celestial City. General Ignorance has taken command of Heaven, and the purpose of recovering God's memory and power is to overthrow General Ignorance from Heaven's Throne so we can all have a better quality of Play of Earth.

This comedy-farce is really an allegory for the fall of Spirit into matter (involution) and the climb back through mankind's evolution of consciousness (in this humorous context). The Play is about enlightenment; awakening from a lower order act of who we think we are to a higher order of Being.

Don't miss the Introduction. It's written as a long humorous letter to Woody Allen attempting to explain the play and to awake Woody to the play's potential as a movie or musical.

The book also contains an extensive Glossary of terms relating the play and to the philosophical, existential, and spiritual issues involved with enlightenment and higher consciousness.