Items related to Hollywood Rocks: The Ultimate Guide to the 1980's... 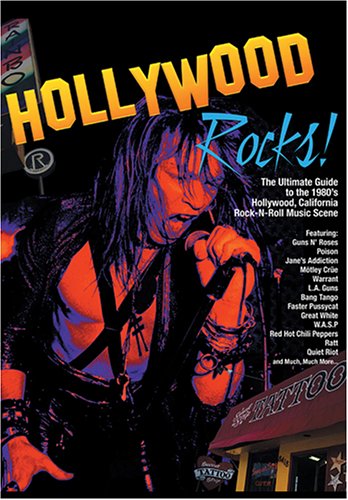 The Sunset Strip, home to such legendary venues as The Whiskey, The Roxy, The Viper Room and The Key Club (formerly Gazarri’s), first came to prominence in the early 1980’s when an army of spandex-clad pioneers emerged from the trashy gutters of downtown Hollywood. In an explosion of youthful exhuberance and truly fantastic performances, the Strip became the breeding ground for the now legendary Guns ‘N’ Roses, Motley Crue, Poison, Jane’s Addiction, Quiet Riot and a slew of others. It was a time of celebration, a non-stop party that raged out of the clubs, onto the sidewalks, and though it’s been nearly a decade since the height of its popularity, the legend of the Strip lives on in a new full-color photo album, featuring 200 pages of rare and exclusive photos, flyers and press releases from this pivotal era of metal. Whether you missed out on this spectacular epoch or your alcohol-soaked memories could use a little refreshing, Hollywood Rocks! is the most detailed, expansive pho

Over 1000 images were compiled to produce this visual chrestomathy of hair, make up and rock n' roll attitude featuring exclusive interviews with stars of the epoch.

Hollywood Rocks! is intended to be a mere "snapshot of an era" for purposes of pure nostalgic happiness. Revel in rare, never before seen photographs of top 80's rock talent such as Guns N' Roses, Motley Crue, Janes Addiction and others. Hear first-hand accounts of the magic backstage from Jerry Dixon of Warrant, Marc Ferrari of Keel, Rikki Rocket of Poison and many more. Enjoy, and we'll see you at the rainbow...