Items related to Plays and Playwrights 2001 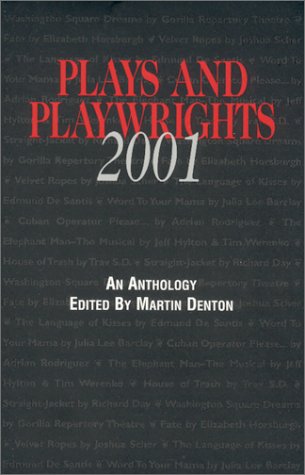 Anthology of new works from the New York theatre, all of which premiered during 2000. Includes: "Washington Square Dreams" by Gorilla Repertory Theatre, "Fate" by Elizabeth Horsburgh, "Velvet Ropes" by Joshua Scher, "The Language of Kisses" by Edmund DeSantis, "Word To Your Mama" by Julia Lee Barclay, "Cuban Operator Please..." by Adrian Rodriguez, "The Elephant Man -- The Musical" by Jeff Hylton & Tim Werenko, "House of Trash" by Trav S.D., and "Straight-Jacket" by Richard Day. With an Introduction by Martin Denton and a Preface by Robert Simonson.

From the Preface by Robert Simonson, editor of Playbill on Line: "Martin Denton is putting new comedies and dramas out where directors, producers, artistic directors, and theatergoers can find them. More than that, he is reinvesting the long moribund world of play publishing with vision and enthusiasm. New plays, it seems are new once more."

Martin Denton is the Executive Director of The New York Theatre Experience, Inc., a nonprofit corporation whose mission is to spread the word about the New York theatre scene. He is the editor and chief theatre reviewer for their website, nytheatre.com. He is also the editor of "Plays and Playwrights for the New Millennium".