Items related to Berkeley 1900, Daily Life at the Turn of the Century

Richard Schwartz Berkeley 1900, Daily Life at the Turn of the Century

Berkeley 1900, Daily Life at the Turn of the Century 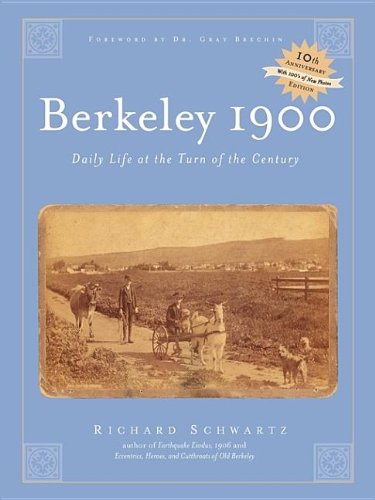 Berkeley 1900 is a book that really tells of the everyday lives of everyday people in Berkeley, California 100 years ago.

We see the world as they did through the medium of the Berkeley Daily Gazzette and old photographs from the era. We feel what life was like for children, woman, emmigrants, bussinessmen, animals and the Bay itself. We witness what people did for leisure, medicine, food, government and the whole of small town life.

The format is so raw and unemcumbered that it sweeps us away. In thirty chapters Schwartz prepares the reader with a textual introduction and follows with newspaper articles (scanned exactly as they appeared 100 years ago in the Berkeley Daily Gazzette), interwoven with quotes from people of the town in 1906 (so the book is as much their own voices as possible) and 175 hundred year old photographs, often puntuating a specific article. There are a total of about 650 newspaper articles from 1900 and 1905.

Richard Schwartz has given birth to a concept, a way of looking back which has moved everyone who has taken its ride into our past.

"Mr. Schwartz has put together a must read book for everyone who loves Berkeley. As we move into the Millennium, it is funny, sobering, and just plain interesting to read about daily events of life in Berkeley in 1900. There are lessons to be learned here, and stories to be told and retold." --Mayor Shirley Dean of Berkeley

"Berkeley 1900 is the first book on Berkeley to approach a true history of day-to-day life in the neighborhoods at the turn of the century." --Stephanie Manning, Berkeley Architectural Heritage Association

"A vivid picture...a fascinating, bottom-up view of Berkeley during the most important decade of its history."
--Dr. Charles Wallenberg, Professor of History, Vista College, Berkeley, California

"By giving us the raw data with which the history of place is constructed, Richard Schwartz has revealed both a time and a town that some of us only thought we knew. Newspaper articles and advertisements, as well as vintage photographs, permit the reader to view Berkeley's past without the processing of an intermediary, and in doing so, the material reveals a country which is alternately more exotic and familiar than we could have imagined. Schwartz has aided the reader by organizing the material by subject and providing brief introductions, thus serving as a knowledgeable but unobtrusive guide through that landscape. This splendidly rich composition should serve as a model for other communities seeking to understand how they have developed and who they are."
--Dr. Gray Brechin, Historical Geographer, University of California, Berkeley

"It was a good day when Richard Schwartz walked into the Berkeley Historical Society on the day we pondered disposing of these newspaper articles, which we were not able to archive because of their condition. His extracts from that material bring an intriguing picture of how we did things in the past in Berkeley and may help us to do better in the years of the new century."
--Ken Cardwell, President Emeritus and Linda Rosen, President, Berkeley Historical Society

For over two decades, I have worked as a building contractor in Berkeley, California. Over the years, having worked on and visited hundreds of houses, I have often blurred my eyes and imagined the crews constructing each house--especially those of the 1800s and of the early 1900s: the carpenters arriving early each day to sharpen their hand saws, their conversation on lunch breaks, the laborers staking barrels of plaster and, finally, Berkeley families of yesterday moving into completed homes with their clothing, toys, photographs and often a goat or goose. Today as I work on these houses, I feel a connection to the builders, their occupants and the times.

In 1976, I worked for the U.S. Forest Service in the Sierra fighting fires. We were often in areas that were littered with artifacts from old logging camps or Native American summer villages. As I worked, I sensed the lives of the people who lived there. I returned many times to reexperience the stirrings of the past.

In 1986, I visited a sixty-five-foot circle of roughly piled stones that had originally been in Stampede Valley, north of Truckee,California. The mystery of who built it and why clung to me. I took a year off to research the stone circle's origin. It became my first book, The Circle of Stones.

Almost a decade and a half later, I was led by my curiosity again. At the suggestion of my friend Steve Brett, I visited the Berkeley Historical Society to see a turn-of-the-century film of a streetcar in Berkeley. I was riveted. Later, as I perused the Society's collection of photographs of old Berkeley, I saw fields where there are now entire neighborhoods. The university was rolling grassland crossed by the willows of Strawberry Creek. Through these pictures, I experienced the past of my adopted home.

On my third visit to the Berkeley Historical Society, docent Burl Willes mentioned that someone had donated a two-foot stack of old Berkeley Daily Gazette newspapers from about 1900 to 1909. The Society could not keep them because of the risk of mold spreading to their other collections. I couldn't imagine these papers being thrown away, so I offered to take them. Though I didn't know it, that was the beginning of Berkeley 1900.

In these pages you will learn of much more than just Berkeley's people. Whales still roamed the Bay in 1900. Bears and rattlesnakes could turn up anytime. For the first time horses were having to share Shattuck Avenue with automobiles. Horses caused many more injuries and deaths than the occasional automobiles. Telephones, electric lights, indoor plumbing and automobiles were marching into Berkeley and the nation.

The news articles in the Gazette detailed lives of average Berkeley citizens and their world at the turn of the century. Though the newspapers are now crumbling, this book and all of us might pass their stories on.

It was out of respect for these Berkeley predecessors, the people whose footprints are still under ours somewhere, that I was moved to write this book.

"If Berkeley had the good sense of the Japanese to recognize outstanding citizens as national treasures, Richard Schwartz would get my vote. Professionally a building contractor, Schwartz somehow finds time to explore Berkeley's past via its newspapers, archives, and maps. He has returned from that forgeign land to self-publish gracefully written and handsome books filled with period illustrations of his discoveries. Those books not only reveal to us a place we thought we knew but are testimony to Schwartz's deep love for his adopted town. I am grateful for his generousity in sharing his wealth."
Dr. Gray Brechin, Historical Geographer, University of California, Berkeley

"Mr. Schwartz has put together a must-read book for everyone who loves Berkeley."
Former Mayor Shirley Dean of Berkeley

2. Berkeley 1900, Daily Life at the Turn of the Century Richard Schwartz and Sauda Burch