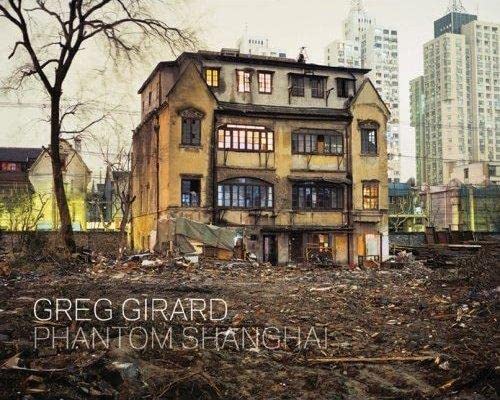 “Shanghai—a city in the process of dismantling its history to accommodate China’s new cosmopolitan vision of itself.”—Greg Girard

As Shanghai modernizes and seeks acceptance as an international city, buildings and neighborhoods that were once preserved simply by lack of intervention are now being purposefully demolished.

Phantom Shanghai is a spectacular look at a Shanghai that won’t survive the vision the country has for itself. For the past five years, Greg Girard has been photographing the city’s buildings, shops, homes, and neighborhoods. This stunning photographic journey is a look at present-day Shanghai, where politically inspired neglect meets politically inspired development.

Greg Girard is a Canadian photographer living in Shanghai since 1998. Largely self-taught, he combines anthropology with a lyrical realism in his work. He is represented in North America by Monte Clark Gallery in Toronto. His editorial work appears in publications such as TIME, Newsweek, Fortune, and The New York Times Magazine.

William Gibson is an American-born Canadian science fiction author. He has been called the father of the cyberpunk subgenre of science fiction. He is credited with coining the term “cyberspace.” His first novel, Neuromancer, has sold more than 6.5 million copies worldwide since its publication in 1984. He is also responsible for Pattern Recognition and the screenplay for Johnny Mnemonic.

Greg Girard (1955-) is a Canadian photographer, living in Shanghai since 1998. He is capturing the transformations in China and across Asia. Largely self-taught, he combines anthropology with a lyrical realism. His editorial work appears in such publications as Time, Newsweek, Fortune, The New York Times Magazine, and more. He is represented by the Monte Clark Gallery in Toronto. An American-born Canadian science fiction writer, he's been called the father of the cypberpunk subgenre. He coined the term "cyberspace." His Neuromancer has sold more than 6.5 million copies since its 1984 release. It was the first novel to win all three major science fiction awards: The Nebula, The Hugo, and the Philip K. Dick Memorial Award.

From The New Yorker:

For decades after the Communist victory, in 1949, Shanghai remained largely intact, preserved by benign neglect, its architecture a rich legacy of the polyglot collision of Asian and Western cultures that formed the city. Since the nineties, however, Shanghai’s metamorphosis into a towering mega-city has been an ineluctable and pitiless process of paving over nearly all previous traces—a phenomenon stunningly documented in Greg Girard’s garish, poetic, infinitely sad photographs. In an indignant introduction, William Gibson calls them "Documents of the Gone World." Seeming to have arrived in each case minutes before the bulldozers, Girard shows us here a pair of stone lions sitting amid the rubble of a condemned factory, there a gorgeous mansion in the old French concession, long ago subdivided for worker housing, and last occupied by members of the very crew charged with knocking it down.
Copyright © 2007 Click here to subscribe to The New Yorker