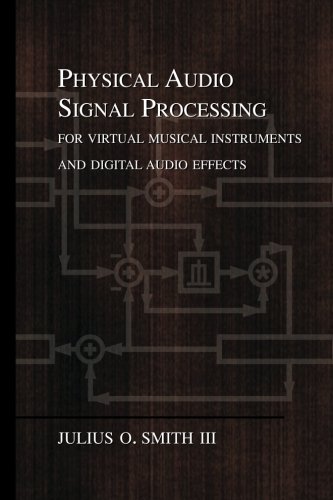 Virtual musical instruments are fast, computational models that implement the "audible essence" of a musical instrument and associated effects in real time. The model should not only sound like the real thing, it should also play like the real thing (from the perspective of a human performer interfaced to the model via specialized controllers and sensors). Of course, a virtual instrument is allowed to surpass the quality and playability of its real-world counterpart, when possible, and this has already occurred in a number of instances. The emphasis in this book is on signal processing models and methods that are used in constructing virtual musical instruments and audio effects. Specific topics considered include delay effects such as phasing, flanging, the Leslie effect, and artificial reverberation; virtual acoustic musical instruments such as guitars, pianos, bowed strings, woodwinds, and brasses; and various component technologies such as digital waveguide modeling, wave digital modeling, commuted synthesis, resonator factoring, feedback delay networks, digital interpolation, Doppler simulation, nonlinear elements, finite difference schemes, passive signal processing, and associated software.

Julius O. Smith teaches a music signal-processing course sequence and supervises related research at the Center for Computer Research in Music and Acoustics (CCRMA). He is formally a professor of music and associate professor (by courtesy) of electrical engineering at Stanford University. In 1975, he received his BS/EE degree from Rice University, where he got a good start in the field of digital signal processing and modeling for control. In 1983, he received the PhD/EE degree from Stanford University, specializing in techniques for digital filter design and system identification, with application to violin modeling. His work history includes the Signal Processing Department at Electromagnetic Systems Laboratories, Inc., working on systems for digital communications, the Adaptive Systems Department at Systems Control Technology, Inc., working on research problems in adaptive filtering and spectral estimation, and NeXT Computer, Inc., where he was responsible for sound, music, and signal processing software for the NeXT computer workstation. Prof. Smith is a Fellow of the Audio Engineering Society and the Acoustical Society of America. He is the author of four online books and numerous research publications in his field. For further information, see http://ccrma.stanford.edu/~jos/.