Items related to ClearView-F1, Williams FW14B, The Evolution and Development...

ClearView-F1, Williams FW14B, The Evolution and Development of the Williams Grand Prix Car 1991-1993 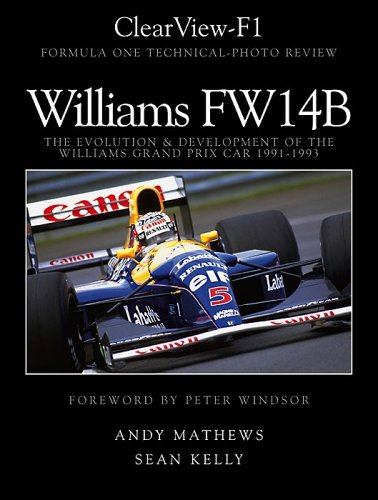 With top Formula 1 teams routinely eclipsing the half-billion dollar mark in an effort to maintain their elite status, it's easy to understand why they go to such extraordinary measures to protect the confidentiality of their not-so-small investments. For this reason, any details clear of a paint scheme in today's Formula 1 world have become completely covert to outside eyes. In 1992, Williams Grand Prix Engineering introduced their FW14B chassis to the world. Mated to Renault’s all-conquering V10 engine, it dominated Formula 1 like practically no car before. With ten victories – nine for Nigel Mansell, the Williams FW14B solidified its place in history as being the most successful chassis during an era dominated by electronic enhancements such as active suspension, traction control and on its successor, the FW15C, ABS braking. Williams Grand Prix opened up their doors exclusively to Andy Mathews and Sean Kelly, to allow them to document the evolution of the car from its initial appearance as FW14 in 1991, right up to its final race - and consecutive World Championship - in 1993 in FW15C trim. They were able to photograph and measure all facets of the car in unprecedented detail. Additionally, they were granted exclusive access to the very engineers who designed and built these cars, to establish the behind the scenes story of how the FW14B became the most feared chassis of the 1990s. This book is truly a rare insight of how a world-beater was born. Peter Windsor, graciously and elegantly forewords the book and charts his own feelings and experiences with the Williams team during his tenure as team manager during the 1992 season. ClearView-F1 – Williams FW14B is the first in a new book series exclusively dedicated to documenting historically significant F1 cars in great photographic and biographic detail. Featuring over 200 full color images from LAT, Rainer Schlegelmilch, Steve Mohlenkamp and Michael Furman, ClearView-F1 is certain to become the definitive series celebrating the Formula 1 car itself.

Over the past 15 years, model-maker Andy Mathews, has cultivated professional and personal relationships with Formula 1 teams, museums and private car collectors who have allowed him the rare honor of documenting some of the most beautiful and historically significant Formula 1 chassis ever produced and raced. With this research, Andy began producing F1 models to a level of detail never seen before, leading him to become one of the most respected model makers in the world. His works are unique, expensive and in the hands of only a few select clients, mostly European, who routinely wait three or more years for each completed piece. He is renowned for his relentless research. His finished pieces are renowned their seemingly impossible level of authentic detail executed with surgical precision and cleanliness. These qualities form the basis for this new series of ClearView-F1 books. He plans to treat his new publishing venture with the same level of passion as his model work. ClearView-F1 is the culmination of Andy's exhaustive research into Formula 1. His commitment to collecting and harvesting information insures that his own model work will continue to improve and remain the very best there is. Never willing to settle for guesswork, his journey will continue. Sean Kelly is a statistician and historical Formula 1 journalist. Born in England to an Irish immigrant family, he first became interested in Formula 1 at the age of six, when he was allowed to stay up late one night and watched the 1987 Brazilian GP on television. Having cut his media teeth in the equally competitive world of baseball, he broke into F1 when he was hired by American television network Speed Channel. Despite only being born in 1980, his level of knowledge has already led to him assisting many countries' F1 broadcasts.

Book Description Hilton Lifetime Publishing LLC, 2005. Condition: Good. A+ Customer service! Satisfaction Guaranteed! Book is in Used-Good condition. Pages and cover are clean and intact. Used items may not include supplementary materials such as CDs or access codes. May show signs of minor shelf wear and contain limited notes and highlighting. Seller Inventory # 0975412701-2-4

Book Description Hilton Lifetime Publishing LLC. Hardcover. Condition: Fine. Item is in like new condition with minor shelf wear. Might have a remainder mark or slight wear from sitting on the shelf. Seller Inventory # DS-0975412701-1