Items related to The Rise and Fall of the Nuestra Familia: The Biography...

Nina Fuentes The Rise and Fall of the Nuestra Familia: The Biography of Robert L. Gratton, One of California's Highest-Ranking Prison Gang Members

The Rise and Fall of the Nuestra Familia: The Biography of Robert L. Gratton, One of California's Highest-Ranking Prison Gang Members 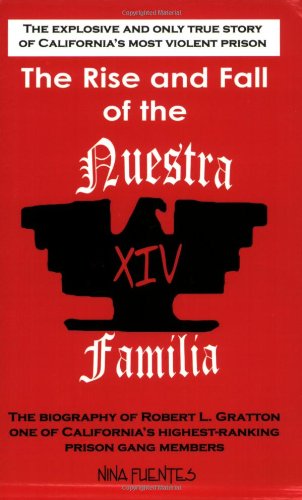 This book follows the life of Robert Gratton, one of the highest-ranking members of La Nuestra Familia, one of California's most violent prison gangs credited with over 300 murders. Until now, little has been known about its 38-year history and activities. Members follow a blood oath and are sworn to a lifetime commitment and secrecy enforced through the threat of death.

Through extensive interviews with Gratton, Nina Fuentes tells the tale of his journey from troubled youth involved in petty crime to his rise to the top of the hierachy of this most feared prison gang. The level of insider detail provided in these pages has never before been known outside of La Nuestra Familia itself.

After findhing himself in a situation similar to that faced by Henry Hill and Sammy "The Bull" Gravano, two of Italian Mafia's heaviest hitters, he bodly decides to follow their lead. Facing the possibility of life in prison, Gratton turned FBI informer, earning an automatic death sentence for his disloyalty.

Gratton, with a new lease on life and in the Witness Protection Program, has since become involved with nuermous law enforcement agencies in the hope that his experience will enable them to understand and combat the insidious influence of gangs on American society.

The Rise and Fall of the Nuestra Familia is the true story of Robert Lee Gratton, who hopes that its grim reality will help turn the lives of young people away from gangs and in a positive direction. It doesn’t glamorize or glorify the so-called gangster lifestyle, consisting of vicious beatings, drive-by shootings, and gangland slayings. Its sincere intent is to serve as an educational resource for parents, law-enforcement personnel, teachers and others to reflect upon for leverage in their fight against gangs.

Robert Gratton was raised in a drug-infested neighborhood plagued by gangs. He knows all too well how it feels to bring suffering and grief to loved ones. He lived a significant part of his life in a notoriously brutal prison gang, and he truly doesn’t want children to become hostages of that nightmare.

This book illustrates that the NF was born from a sound need for Northern California Latinos to protect themselves from the Mexican Mafia (EME), a gang that was victimizing and abusing its own people within the walls of the California Department of Corrections. This initial "Cause" has since moved down the ladder of importance and has been replaced by a thirst for money, power and recognition. The NF is all about money and murder.

I once characterized the NF as a shadow: One knew it was there, calling the shots, but it couldn’t actually be touched. All the assumptions and speculation about it are true. How it recruits, communicates, issues orders and authorizes murders is detailed in the pages that follow. La Nuestra Familia is a corrupt organization that enslaves its youth, uses and abuses them, and then discards them when they have served their purpose.

For parents reading this book: The NF seeks to not only adopt your children – it wants to own them!

For the wannabes and hard-core gang members reading this book: be careful what you wish for! Look to yourselves, your families, teachers and friends – not the gang – for guidance for your present and future. Learn from the tragedies others have suffered.

For investigators reading this book: learn from it, educate others and make a difference. Our struggle as law-enforcement officers never ends. When all else fails, put them in jail.

1. The Rise and Fall of the Nuestra Familia: The Biography of Robert L. Gratton, One of California's Highest-Ranking Prison Gang Members

Book Description Know Gangs Publishing 2006-01-01, 2006. Paperback. Condition: Good. Item is in good condition. Some moderate creases and wear. This item may not come with CDs or additional parts including access codes for textbooks. Might be an ex-library copy and contain writing/highlighting. Photos are stock pictures and not of the actual item. Seller Inventory # DS-0977629201-3