Items related to Predicting the Unpredictable: How Neural Networks Enhance...

Predicting the Unpredictable: How Neural Networks Enhance Predictability and Performance in Portfolio Management 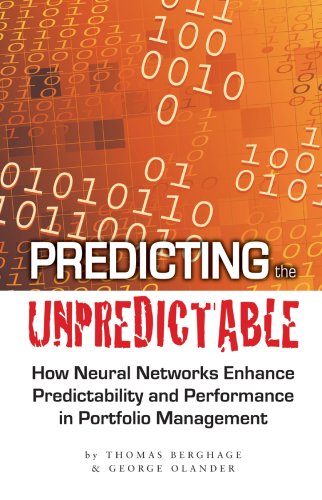 Thomas Berghage has beaten the S&P 500 17 years and running. According to this eye-opening book, the key to his success is artificial intelligence and quantum mechanics. In Predicting the Unpredictable, Berghage and Dr. George Olander look at the flaws and limitations of contemporary securities analysis and the ways in which the human element inevitably hinders investment. Computers, with their ability to analyze infinitely more variables at once than a human can possibly handle, have the power to take the guesswork out of finance and save us all from the ambiguities of behavioral finance.

Thomas Berghage has over 22 years of experience in the securities industry. Mr. Berghage served as Vice President and Director of Research for two different regional brokerage firms before founding NeuWorld Financial, an investment technology firm. He is an NASD-registered General Securities Principal, a state-registered investment advisor and has been President and a board member of the CFA Society of San Diego. This is his second book, after Beyond Comprehension: the Limits of Human Security Analysis.
Prior to entering the financial field, Commander Berghage was a member of an elite group of Navy research psychologists dealing with human limitations in advanced military systems. He also served two years as an independent consultant on human engineering for Lawrence Livermore National Laboratory.

Dr. George Olander has taught Corporate Finance and Portfolio Management at Arizona State University since 2000. He also serves on the Executive Board of the Academic Senate for the University. He is a registered representative with the Genworth Company and has held his NASD security registrations since 1993. Prior to entering academia, Dr. Olander worked in several different financial capacities, including Financial Analyst, Controller, and Vice President of Finance for various corporations. He has worked in the Venture Capital field and as a business and corporate consultant, and has written investment and financial articles for several newspapers and hosted live radio and TV investment programming. Dr. Olander was an officer in the US Marine Corps and a Marine Corps Aviator. He is the Royal Norwegian Consul-Phoenix and serves as a member of the Arizona Consular Corps.

Few in the business of decision making want to believe that a neural net, even if they understand the principles of artificial intelligence, is consistently capable of cranking out decisions equal to or better than humans. In the case of a neural net, as opposed to an expert system, the added problem in believing programs can be written which result in better decision making than humans is compounded by an inability to determine the specific reason decisions were reached. One can back test results but one cannot identify the confluence of factors that resulted in a specific predictive ranking and weighting. The difficulty of the professional portfolio manager in accepting the ability of well designed neural nets to perform is similar to what commercial pilots must have felt when planes were first landed unaided by those sitting there with their hands poised above the yoke and throttles, though in the end not required.

The importance of this book goes beyond successful portfolio management. It proves that neural nets are capable of taking vast amounts of data and quickly processing the data to a point of satisfactory decision-making. Clearly, pursuits such as medical diagnostics and a range of engineering problems are appropriate focus areas where the decision-making can be remote from the subject of the study. I urge those who are concerned with the future, knowing it and shaping it, to read Predicting The Unpredictable as what's around the corner can be important.

1. Predicting the Unpredictable: How Neural Networks Enhance Predictability and Performance in Portfolio Management