Items related to To Set The Record Straight: How Swift Boat Veterans,... 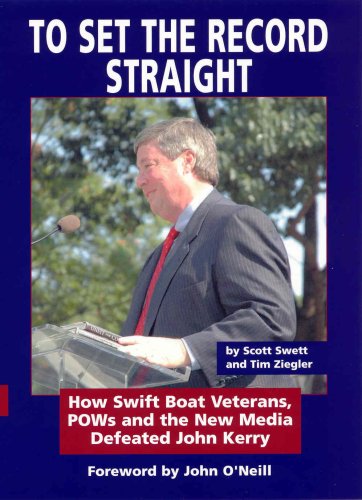 To Set the Record Straight is the inside story of how an ad hoc collection of veterans and political activists overcame their opponents' efforts to silence and marginalize them, and delivered the explosive truth about John Kerry's past to the public during the 2004 presidential campaign. It is a story of justice and vindication long delayed, of an insurgent assault on the old media by a new wave of online reporters, and of the long struggle of America's Vietnam veterans to make their way home.

During the Vietnam War, the original television networks and the leading liberal newspapers were near the peak of their formidable persuasive powers, able to dominate public opinion to an extent difficult to imagine today. In an age without cable news networks, popular conservative radio shows or the Internet, they were the only game in town. What these organizations chose to cover became news, and what they ignored did not. They used that power to instill Kerry's false portrait of American veterans as misfits, drug addicts and baby killers into the popular culture.

When John Kerry made his service in Vietnam the cornerstone of his presidential campaign in 2004, the wounds he had inflicted on millions of Vietnam veterans were re-opened. Many veterans decided they could no longer be silent while a man who had repeated the propaganda of America's enemies rose to the position of Commander-in-Chief.

Kerry and his advisors believed that their old media allies would suppress any challenge to their version of what Kerry had done during his time in Vietnam and in the antiwar movement. It didn't work out that way.

Scott Swett created and managed the web sites SwiftVets.com and WinterSoldier.com during the 2004 campaign, working closely with Swift boat veterans, former POWs and other Vietnam veterans to help bring their experiences to the public.

Tim Ziegler is a former Marine Captain and tank platoon commander has worked on a variety of grassroots political campaigns and hosted several online radio shows.