Items related to Zeb and the Great Ruckus

Zeb and the Great Ruckus 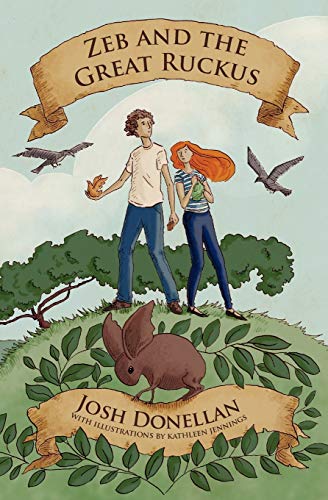 "What's your favourite song?" If you answered, "Nothing, sir! Music is evil!" then you probably live in the land of Bravura, where the wicked Czar has outlawed music and all artists have been imprisoned or exiled. As if that wasn't bad enough, the Alephs, magical creatures that eat music with their ears, are slowly becoming extinct. Fortunately, Zeb and his best friend Flip are armed with magic, courage and weaponised toffee and they are about to begin their quest to bring back the legendary musician Smokey Waters so that he can restore the land with his Ruckus Music. Along the way they'll face the Czar's admonishers, steelhawks, bewilderbeasts and the most fearsome creature of all, the cave-dwelling Ruttersnarl. At least they'll have an excuse for not finishing their homework...

Josh Donellan is an author, poet, musician, music journalist, teacher, voice actor and event manager. He was almost devoured by a tiger in the jungles of Malaysia, nearly died of a lung collapse in the Nepalese Himalayas and once fended off a pack of rabid dogs with a guitar in the mountains of India. He has an unnatural fondness for scrabble and an irrational dislike of frangipanis.

1. Zeb and the Great Ruckus (Paperback or Softback)

2. Zeb and the Great Ruckus

3. Zeb and the Great Ruckus