Items related to Revelations of Doom (The Light Warden) (Volume 1) 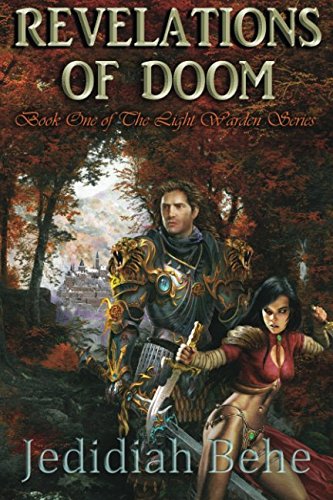 “Lucian was about to go up the steps to the loft when the soft sound of steel rang out from above. It was not at all loud, but the sound a blade would make being slowly pulled from its scabbard. Many years spent in the woods listening to the ambient rhythms of nature had trained his ears to pick up such out of place sounds. His body reacted reflexively, without thought, as though he had done so thousands of times before. He jumped back off the steps just in time to see the glint of a sword slice past were his head was and thunk into the railing. He touched the pommel of his sword, feeling the energy surge through him, and was about to pull it free when something within urged him to stop. Before he could decipher the reason for this impulse, the dark form leapt down at him. He ducked back just far enough to let a second blade wisp by his face. The first was still lodged in the railing. This dodge put him in close to his attacker making it possible for him to easily strike a deadly blow, but again something inside gave him pause. And then, in the soft glow of a nearby lantern, he caught a glimpse of his attacker and she was absolutely beautiful.” Choices, we all make them, every day moment by moment. What most people do not realize is how a simple choice could very well alter their own life and those of everyone around them greatly. What would you do if you were blessed with the curse of being able to see evil and how they manipulate those around you? Would you choose to run in fear, ignore what you have just seen, or fight against something that no one else can see, and therefore limits their belief? Lucian was chosen to be such a man, much to his dismay. On a path of vengeance he strikes out to find a murderer, unknowing that the world around him is at the brink of war. He pushes on through pain, treachery, despair and even death, only to receive a Revelation that shows him what could very well become the future of his world, and it terrifies him. He is given the ability to see the creatures of shadow, set to destroy the world of the living and manipulate mankind into an evil existence. He is now faced with choices that would change the world forever. The pathways to his destiny are set, but he must choose to follow the correct path, for free will must always be heeded.

JEDIDIAH BEHE lives in NC with his wife Lennie. An artist since his youth, he would draw characters, worlds, and then write out short stories about them. After years of telling Lennie about all of the ideas in his head, she finally encouraged him to write a book. Always the avid reader, Jedidiah had never considered writing until then, and decided to take his wife’s advice and put pen to paper, or finger to keyboard. He quickly found a new love in creating Revelations of Doom. He still works full time as a Police Officer, but whenever time permits, he writes.

1. Revelations of Doom (The Light Warden)