Items related to More Than Two: A Practical Guide to Ethical Polyamory 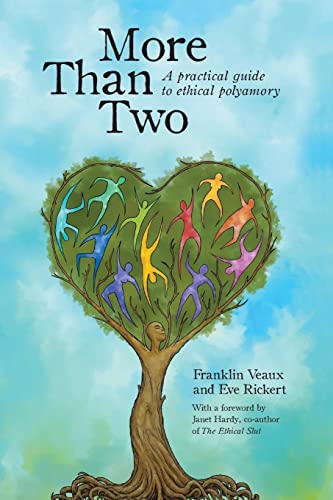 Can you love more than one person? Have multiple romantic partners, without jealousy or cheating? Absolutely! Polyamorous people have been paving the way, through trial and painful error. Now the new book More Than Two can help you find your own way. With completely new material and a fresh approach, Franklin Veaux and Eve Rickert wrote More Than Two to expand on and update the themes and ideas in the wildly popular polyamory website morethantwo.com.

From Ancient Greece through the many dynasties of China to current practices of non-monogamy, people have openly engaged in multiple intimate relationships. Not until the late 20th century, however, was a word coined that encapsulated the practice, as well as its philosophies, edicts and ethics: polyamory (poly = many + amore = love).

For Franklin Veaux, who has been polyamorous for his entire adult life, the emerging framework and subsequent vocabulary for his lifestyle was a light in the dark. Candidly sharing his experiences and thoughts online catapulted his website morethantwo.com, among the first dedicated to the poly lifestyle, to one of the top-ranking on the subject.

In recent years, as more people have discovered polyamory as a legitimate and desirable option for how they conduct their relationships, Franklin and one of his partners, Eve Rickert, saw that there was a growing need for a comprehensive guide to the lifestyle. More Than Two is that guide.

This wide-ranging resource explores the often-complex world of living polyamorously: the nuances (no, this isn't swinging), the relationship options (do you suit a V, an N, an open network?), the myths (don't count on wild orgies and endless sex but don't rule them out either!) and the expectations (communication, transparency and trust are paramount). More Than Two is entirely without judgment and peppered with a good dose of humor. In it the authors share not only their hard-won philosophies about polyamory, but also their hurts and embarrassments. Living poly is not always an easy road, and they hope that by reading this book, you'll avoid some of the mistakes they've made along the way.

Challenging the notion of what society considers a healthy and successful relationship, they offer up personal stories from their own lives as well as of those in the wider poly world, emphasizing that this lifestyle choice isn't for the noncommittal. Polyamory is all about the relationships and the individuals participating. Charting a Relationship Bill of Rights, the authors underscore the importance of engaging in ethical polyamory and guide readers through the thorny issues of jealousy and insecurity with the aim of encouraging readers to work consistently and conscientiously on both their relationships and themselves.

And no, they're not trying to convert you: they know that polyamory isn't for everyone. Veaux and Rickert simply provide those who might be embarking on this lifestyle or those who have always known they are poly with a set of tools and many questions to help them make informed decisions and set them on a path to enjoying multiple happy, strong, enriching relationships.

More Than Two is the book the polyamory community has been waiting for. And who knows? It may just be the book you didn't even know you were waiting for.

“Franklin and Eve's new groundbreaking book is a must-read deep dive into the psychology, morality, and practicalities of non-monogamy done well. Buy two copies: one for yourself and one for that friend who is going to insist on borrowing it.” — Pepper Mint, sex educator and polyamory activist “This book is going to be an Event. It will immediately rank right at the top of the 36 nonfiction books about polyamory published in the last 30 years, and with its depth, insight and seriousity (right word?) I think it could break out into wider mainstream attention.” — Polyamory in the News “Dossie and I have been described as 'big sisters' (if your big sister is a slutty kinky aging hippie); Franklin and Eve are more like 'wise neighbors' – think of the guy on the other side of the fence on Home Improvement, calm and wise and funny. Dossie and I write primarily about the sexual aspects of poly; Franklin and Eve are more interested in the day-to-day living part. Dossie and I like to indulge ourselves, just a little, in high-flown realms of abstraction and idealism; Franklin and Eve like to keep their feet on the ground.” — from the foreword by Janet Hardy, co-author of The Ethical Slut

Franklin Veaux has been ideologically polyamorous his entire life, functionally polyamorous since 1984, and writing about polyamory since 1998. Monogamy has never made much sense to him. (When he heard a fairy tale about a princess forced to choose between two handsome princes, he thought everyone knows princesses live in castles And castles are big enough for both princes. So why does she have to choose? )

He started practicing non-monogamy from the moment he started becoming aware that boys and girls are different. Along the way, he's made just about every mistake it s possible to make in polyamorous relationships. Good judgment comes from experience, and experience comes from poor judgment.

Today, he has five partners, lives in Portland, Oregon, and spends a great deal of time writing about everything from relationship ethics to transhumanism to computer security.

Eve Rickert is a professional writer, editor and mastermind, and the co-author, with Franklin Veaux, of the newly released polyamory book More Than Two. Until taking time off from life to write the book, she co-organized a group for poly women in Vancouver, Canada and she blogs at the More Than Two website. She owns a science communications firm in Vancouver, Canada, called Talk Science to Me.

Eve has been living poly since 2008, though her poly roots go back much deeper. Her approach to poly has changed radically over the years: from early experiences in high school, to first hearing the word polyamory in 1998, to first swingers party in 2006, to her current three long-term relationships. And being poly has radically changed her. She's made a lot of mistakes and learned a lot of hard lessons. She co-wrote More Than Two to share those experiences with anyone who is struggling to maintain ethical multiple relationships with integrity, compassion and courage.

More Than Two: A Practical Guide to Ethical Polyamory (Paperback)

Book Description Paperback. Condition: New. Language: English. Brand new Book. Can you love more than one person? Have multiple romantic partners, without jealousy or cheating? Absolutely! Polyamorous people have been paving the way, through trial and painful error. Now there's the new book More Than Two: A practical guide to ethical polyamory to help you find your own way. Seller Inventory # AAV9780991399703

More Than Two: A Practical Guide to Ethical Polyamory (Paperback or Softback)

More Than Two: A Practical Guide to Ethical Polyamory (Paperback)

Book Description Paperback. Condition: new. Paperback. Can you love more than one person? Have multiple romantic partners, without jealousy or cheating? Absolutely! Polyamorous people have been paving the way, through trial and painful error. Now there's the new book More Than Two: A practical guide to ethical polyamory to help you find your own way. Shipping may be from multiple locations in the US or from the UK, depending on stock availability. Seller Inventory # 9780991399703

More Than Two: A practical guide to ethical polyamory