Items related to Making Europe: The Story of the West

Making Europe: The Story of the West 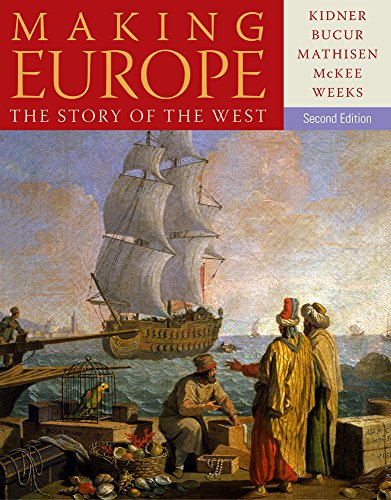 Developed by a team of authors who have spent many years making history accessible to a diverse range of readers, each chapter of MAKING EUROPE begins with clear learning objectives and timelines, and continues with an accessible narrative that uses focus questions throughout the text to help all readers understand historical concepts. The "Check-In" feature and the "Test Yourself" questions at the end of each chapter help you assess your understanding of the material. The text uses stories of ordinary people and their impact on history, and visually stunning images and maps that make learning history interesting. Available in the following split options: MAKING EUROPE, Second Edition Complete; Since 1300; Volume 1: To 1790; and Volume 2: Since 1550.

Frank L. Kidner is Professor of History Emeritus at San Francisco State University, where he taught from 1968 until his retirement in 2006. He has also taught in the Western Civilization program at Stanford University and at Amherst College. His courses include Western Civilization, undergraduate and graduate courses in Early Modern Europe, and the history of the Christian Church as well as a graduate course in historical methodology. He has authored articles on topics in Late Antiquity and co-edited TRAVEL, COMMUNICATION, AND GEOGRAPHY IN LATE ANTIQUITY.

Maria Bucur is John V. Hill Professor in Eastern European History and Professor of Gender Studies at Indiana University, where she has taught an undergraduate course on "The Idea of Europe" and other topics in nineteenth- and twentieth-century eastern Europe. Her research focus is on social and cultural developments in eastern Europe, with a special interest in Romania (geographically) and gender (thematically). Her publications include EUGENICS AND MODERNIZATION IN INTERWAR ROMANIA and HEROES AND VICTIMS: REMEMBERING WAR IN TWENTIETH CENTURY ROMANIA. When not writing and reading history or administrative memos, Bucur is following her dream of being in a band (violin and bass) with her husband and children.

Ralph Mathisen is Professor of History, Classics, and Medieval Studies at the University of Illinois at Urbana-Champaign. He is a specialist in the ancient world with a particular interest in the society, culture, and religion of Late Antiquity. His teaching experience includes Western Civilization and topics in the Ancient Near East, Greece, Rome, Byzantium, coinage, and Roman law. He has written more than seventy scholarly articles and has written or edited 10 books, the most recent of which is PEOPLE, PERSONAL EXPRESSION, AND SOCIAL RELATIONS IN LATE ANTIQUITY. He is also the editor of the JOURNAL OF LATE ANTIQUITY and OXFORD STUDIES IN LATE ANTIQUITY. He enjoys traveling, running, and ballroom dancing.

Sally McKee is Professor of History at the University of California at Davis, where she teaches courses on Western Civilization and medieval history. Her research focus has been Venice and its colonies and Mediterranean slavery, but her new project centers on nineteenth-century France and Italy. She is the author of articles that have won prizes and been anthologized, and she has also published a three-volume edition of Venetian-Cretan wills and a monograph, UNCOMMON DOMINION: VENETIAN CRETE AND THE MYTH OF ETHNIC PURITY. When she is not teaching, she travels the world in search of archives, modern art museums, and great street food.

Theodore R. Weeks is Professor of History at Southern Illinois University at Carbondale, where he teaches Western Civilization and world and European history. His research centers on nationality, inter-ethnic relations, and antisemitism in eastern Europe. He is the author of NATION AND STATE IN LATE IMPERIAL RUSSIA and FROM ASSIMILIATION TO ANTISEMITISM: THE "JEWISH QUESTION" IN POLAND, 1850-1914, and his articles have appeared in several languages, including Estonian and Hebrew.

"The single best characteristic of this text is the clear writing style and the level of detail. The narrative makes sense and extraneous details are largely cut out. My students get very confused reading other texts where the narrative is over rich in detail but thin in analysis."

"Making difficult material clear is a real strength of this book."

1. Making Europe: The Story of the West

2. Making Europe: The Story of the West