Items related to Marine Navigation and Safety of Sea Transportation:... 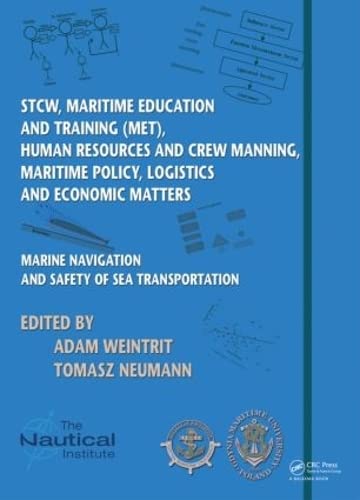 The TransNav 2013 Symposium held at the Gdynia Maritime University, Poland in June 2013 has brought together a wide range of participants from all over the world. The program has offered a variety of contributions,  allowing to look at many aspects of the navigational safety from various different points of view. Topics presented and discussed at the Symposium were: navigation, safety at sea, sea transportation, education of navigators and simulator-based training, sea traffic engineering, ship's manoeuvrability, integrated systems, electronic charts systems, satellite, radio-navigation and anti-collision systems and many others. This book is part of a series of four volumes and provides an overview of Education and Training, Human Resources and Crew Resource Management, Policy and Economics and is addressed to scientists and professionals involved in research and development of navigation, safety of navigation and sea transportation.

Adam Weintrit is a Professor and Dean of the Faculty of Navigation (since 2008) of Gdynia Maritime University, Poland and the Head of the Navigational Department (since 2003). He was also Head of the Electronic Navigational Charts and ECDIS Simulator (1996-2010).

He has got M.Sc degree from Gdynia Maritime University, Faculty of Navigation (1985), Ph.D and DSc degree (1992) and habilitation degree (2004) from Warsaw Technical University, Faculty of Geodesy and Cartography. He has over 25 years experience in teaching and research works in the field of maritime navigation, sea transport, hydrography, cartography, geodesy and safety at sea. He has been involved in national projects founded by the Polish Committee for Scientific Research, several local projects founded by GMU and has also co-operated in few international projects, including European Union projects and he received 3 grants of the IAMU founded by the Nippon Foundation (including two as a project leader).

He has published more than 250 reports and papers in journals and conference proceedings. He is author of 18 books on navigation, including 5 handbooks on ECDIS and electronic charts. He has many times been the member of the program and organising committees of international conferences and symposiums. He is Chairman of TransNav.