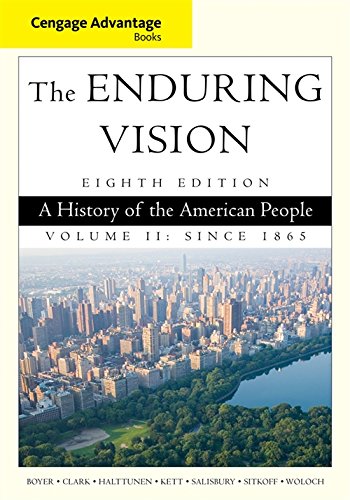 This book is an economically priced version of THE ENDURING VISION, Eighth Edition (©2014). The Advantage Edition offers readers the complete narrative while limiting the number of photos, tables, and maps. Its engaging presentation integrates political, social, and cultural history within a chronological framework. Known for its focus on the environment and the land, the book is also praised for its innovative coverage of cultural history, public health and medicine, and the West-including Native American history. The eighth edition incorporates new scholarship throughout, includes a variety of new photos, and brings the discussion fully up to date with coverage of the 2012 presidential campaign.

Paul S. Boyer, Merle Curti Professor of History Emeritus at the University of Wisconsin, Madison, earned his Ph.D. from Harvard University. An editor of NOTABLE AMERICAN WOMEN, 1607-1950 (1971), he also co-authored SALEM POSSESSED: THE SOCIAL ORIGINS OF WITCHCRAFT (1974), for which, with Stephen Nissenbaum, he received the John H. Dunning Prize of the American Historical Association. His other works include URBAN MASSES AND MORAL ORDER IN AMERICA, 1820-1920 (1978), BY THE BOMB'S EARLY LIGHT: AMERICAN THOUGHT AND CULTURE AT THE DAWN OF THE ATOMIC AGE (1985), WHEN TIME SHALL BE NO MORE: PROPHECY BELIEF IN MODERN AMERICAN CULTURE (1992), and PROMISES TO KEEP: THE UNITED STATES SINCE WORLD WAR II (3e, 2003). He is also editor-in-chief of the OXFORD COMPANION TO UNITED STATES HISTORY (2001). His articles and essays have appeared in the "American Quarterly," "New Republic," and other journals. He has been a visiting professor at the University of California, Los Angeles; Northwestern University; and the College of William and Mary.

Clifford E. Clark, Jr., M.A. and A.D. Hulings Professor of American Studies and professor of history at Carleton College, earned his Ph.D. from Harvard University. He has served as both the chair of the History Department and director of the American Studies program at Carleton. Clark is the author of HENRY WARD BEECHER: SPOKESMAN FOR A MIDDLE-CLASS AMERICA (1978), THE AMERICAN FAMILY HOME, 1800-1960 (1986), THE INTELLECTUAL AND CULTURAL HISTORY OF ANGLO-AMERICA SINCE 1789 in the GENERAL HISTORY OF THE AMERICAS SERIES, and, with Carol Zellie, NORTHFIELD: THE HISTORY AND ARCHITECTURE OF A COMMUNITY (1997). He also has edited and contributed to MINNESOTA IN A CENTURY OF CHANGE: THE STATE AND ITS PEOPLE SINCE 1900 (1989). A past member of the Council of the American Studies Association, Clark is active in the fields of material culture studies and historic preservation, and he serves on the Northfield, Minnesota, Historical Preservation Commission.

Karen Halttunen, professor of history at the University of Southern California, earned her Ph.D. from Yale University. Her works include CONFIDENCE MEN AND PAINTED WOMEN: A STUDY OF MIDDLE-CLASS CULTURE IN AMERICA, 1830-1870 (1982) and MURDER MOST FOUL: THE KILLER AND THE AMERICAN GOTHIC IMAGINATION (1998). She edited THE BLACKWELL COMPANION TO AMERICAN CULTURAL HISTORY (2008) and co-edited, with Lewis Perry, MORAL PROBLEMS IN AMERICAN LIFE: NEW ESSAYS ON CULTURAL HISTORY (1998). As president of the American Studies Association and as vice-president of the Teaching Division of the American Historical Association, she has actively promoted K-16 collaboration in teaching history. She has held fellowships from the Guggenheim and Mellon Foundations, the National Endowment for the Humanities, the Huntington Library, and the National Humanities Center, and has been principal investigator on several Teaching American History grants from the Department of Education.

Joseph F. Kett, James Madison Professor of History at the University of Virginia, received his Ph.D. from Harvard University. His works include THE FORMATION OF THE AMERICAN MEDICAL PROFESSION: THE ROLE OF INSTITUTIONS, 1780-1860 (1968), RITES OF PASSAGE: ADOLESCENCE IN AMERICA, 1790-PRESENT (1977), THE PURSUIT OF KNOWLEDGE UNDER DIFFICULTIES: FROM SELF-IMPROVEMENT TO ADULT EDUCATION IN AMERICA, 1750-1990 (1994), and THE NEW DICTIONARY OF CULTURAL LITERACY (2002), of which he is co-author. A former History Department chair at Virginia, he also has participated on the Panel on Youth of the President's Science Advisory Committee, has served on the Board of Editors of the "History of Education Quarterly," and is a past member of the Council of the American Studies Association.

Neal Salisbury, Barbara Richmond 1940 Professor Emeritus in the Social Sciences (History), at Smith College, received his Ph.D. from the University of California, Los Angeles. He is the author of MANITOU AND PROVIDENCE: INDIANS, EUROPEANS, AND THE MAKING OF NEW ENGLAND, 1500-1643 (1982), editor of THE SOVEREIGNTY AND GOODNESS OF GOD, by Mary Rowlandson (1997), and co-editor, with Philip J. Deloria, of THE COMPANION TO AMERICAN INDIAN HISTORY (2002). With R. David Edmunds and Frederick E. Hoxie, he has written THE PEOPLE: A HISTORY OF NATIVE AMERICA (2007). He has contributed numerous articles to journals and edited collections and co-edits a book series, CAMBRIDGE STUDIES IN NORTH AMERICAN INDIAN HISTORY. He is active in the fields of colonial and Native American history and has served as president of the American Society for Ethnohistory and on the Council of the Omohundro Institute of Early American History and Culture.

"THE ENDURING VISION has been a wonderful and pleasant find."

"The text is well balanced in terms of social and cultural topics as compared to land and environment."

Book Description Cengage Learning. PAPERBACK. Condition: Fair. 1285193407 ***PLEASE NOTE*** *This book is in Fair-Acceptable Condition. Has obvious wear & tear on cover and pages, writing & highlighting from previous use. Will have different used book stickers on cover and binding. Regardless of title, CD/DVD/Access Codes or Supplemental Materials are not guaranteed. This is a U.S. Student Edition Book. This book is not a rental. Seller Inventory # Z1285193407Z4

Book Description Cengage Learning, 2014. Paperback. Condition: Good. Usually ships within 24 hours in quality packaging. Satisfaction guaranteed. Books have varying amounts of wear and highlighting. Please note that items may contain writing and/or highlighting and may not include CDs, access cards, or other supplementary material. We are not able to ship internationally. Your satisfaction is guaranteed! Items ship in quality packaging within 2 business days. Seller Inventory # 8800032822180

Book Description Cengage Learning, 2014. Condition: Good. A+ Customer service! Satisfaction Guaranteed! Book is in Used-Good condition. Pages and cover are clean and intact. Used items may not include supplementary materials such as CDs or access codes. May show signs of minor shelf wear and contain limited notes and highlighting. Seller Inventory # 1285193407-2-4