Items related to The Interrogation 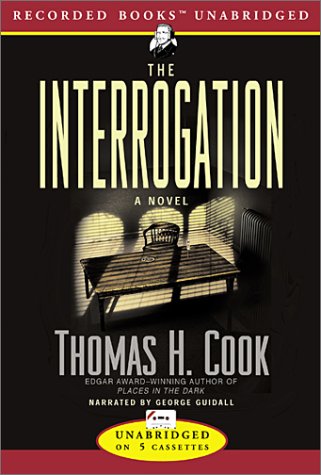 In his latest novel of unrelenting suspense, Edgar Awardâ winning author Thomas Cook journeys into the darkest corners of the human heart to tell a mesmerizing story of crime and retributionâ and the forces that push even good people to the breaking point.

Albert Jay Smalls sits in an interrogation room accused of an unspeakable crime. The police have no witnesses, no physical evidence, but they are certain he is hiding the truth. With less than twelve hours before he must be released, Smalls will be put through one final interrogation. I

It is a search that leads into the shadowed recesses of one manâ s shattered mindâ and to the devastating secrets buried in a desolate seaside town. It is a quest that takes three desperate cops down a dark, twisting road as they race against the clock to find out what really happened one rainy autumn afternoon in 1952. The answers will be more shocking than anyone can imagine, blurring the boundaries between pursuers and prey, between the innocent and the guilty, between the truth that sets us free and the tragedies that haunt us to the grave.

Against a gripping backdrop of murder and redemption, master storyteller Thomas Cook probes the uneasy, shifting bonds of family, love, and unbearable loss, proving once again why he is â perhaps the best American writer of crime fiction currently practicingâ (Drood Review).

In this tight, suspenseful tale of a race against the clock to get a confession out of the chief suspect in the death of young Cathy Lake, every cop has his own private burden, his own reason for wanting to crack Albert Jay Smalls wide open and confirm him as the killer. Jack Pierce has the memory of his own murdered daughter and the promise he made to Cathy's mother. Norman Cohen has the vision of the terrible things he saw at the liberation of a concentration camp, the certain knowledge of the presence of evil in the world. Thomas Burke, the chief of police, has a dying son who's been dead to him for a long time.

Cook weaves the tragedies of all their lives almost seamlessly into the last 12 hours of their interrogation of the suspect; when it's over, if there's no confession, they must let Smalls go. This suspenseful thriller showcases Cook's skill at interpreting the psychological complexities of his well-drawn characters and his ability to turn an otherwise ordinary police procedural into a tense, haunting, and resonant novel. --Jane Adams

Thomas H. Cook is the author of 14 previous novels and two books of true crime.

Book Description Recorded Books, 2002. AUDIO CASSETTE. Condition: Good. 5 AUDIO CASSETTE EDITION. Some shelf wear to the covers. We will test each cassette, prior to shipping for a smooth sound. You will receive a reliable set. Enjoy this AUDIO CASSETTE TAPE performance for your home and library. Audio Book. Seller Inventory # 491402122020855