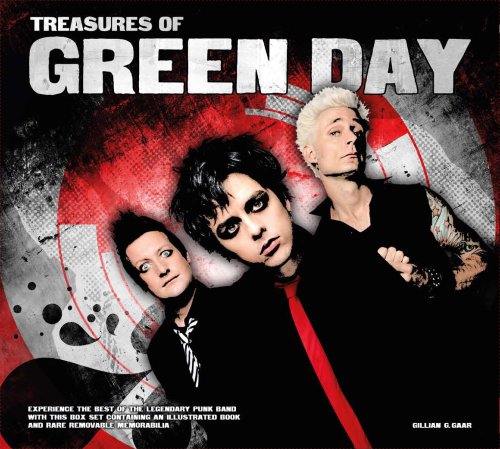 Love Green Day? Then you'll have the “Time Of Your Life” with this new entry in the popular Treasures series. It follows the groundbreaking California punk-rock band from their scrappy high-school days to international stardom to the triumphant Tony® Award-winning Broadway adaptation of their blockbuster concept album American Idiot. Accompanied by a wealth of superb photographs and 20 pieces of super-rare facsimile memorabilia ranging from ticket stubs and set lists to backstage passes and flyers, this collector's item is a must-have for every Green Day fan.

Music journalist Gillian G. Gaar has written numerous books, including She's A Rebel: The History of Women in Rock & Roll, The Rough Guide to Nirvana, Treasures of Nirvana, and Green Day: Rebels with a Cause (Omnibus Press, London, 2007). She has written liner notes for collections by Laurie Anderson, Judy Collins, Heart, Pat Benatar, Paula Cole, and Mat Kearney, among others. She was also a project consultant/liner-note writer for Nirvana's box set With the Lights Out. Garr has written for several magazines and newspapers, including Rolling Stone, Mojo, Goldmine, and the Seattle Times, and was a senior editor at Seattle music biweekly newspaper the Rocket. She lives in Seattle, WA.