Items related to This Is Not My Hat

Klassen, Jon This Is Not My Hat

This Is Not My Hat 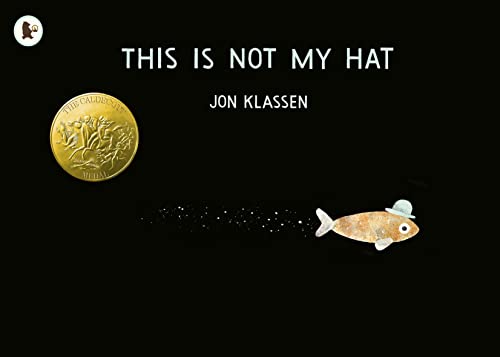 Amazon Best Books of the Year 2012: Jon Klassen first surprised readers with his runaway best seller, I Want My Hat Back, and his follow-up, This Is Not My Hat is an inside out version that is even more fun. Not only did Klassen go with a dark color scheme where the last was light, the action takes place underwater with much of the story told through the expressive illustrations of sea creatures. From the little fish who steals a bowler hat to the crab who sells him out with eyeballs pointing the way, there are lots of laughs along with lessons. This time Klassen created an ambiguous ending that invites lively conversation about the possible outcomes and ultimately leaves it up to the child to decide the little fish's fate with every reading. --Seira Wilson

Jon Klassen is the author-illustrator of I Want My Hat Back and This Is Not My Hat, the only book to ever win both the Kate Greenaway and Caldecott Medal. He also illustrated Mac Barnett's Extra Yarn and served as an illustrator on the animated feature film Coraline. His illustrations for Caroline Stutson's Cats Night Out won the Governor General's Award in 2010. Originally from Niagara Falls, Canada, Jon now lives in Los Angeles, California. Find Jon online at www.burstofbeaden.com and on Twitter as @burstofbeaden.

Book Description 2014. Paperback. Condition: New. Paperback. When a tiny fish shoots into view wearing a round blue top hat (which happens to fit him perfectly), trouble could be following close behind. So it's a good thing that enormous fish won't .Shipping may be from multiple locations in the US or from the UK, depending on stock availability. 40 pages. 0.200. Seller Inventory # 9781406353433