Items related to Principles of Economics: With Coursemate

Principles of Economics: With Coursemate

Principles of Economics: With Coursemate 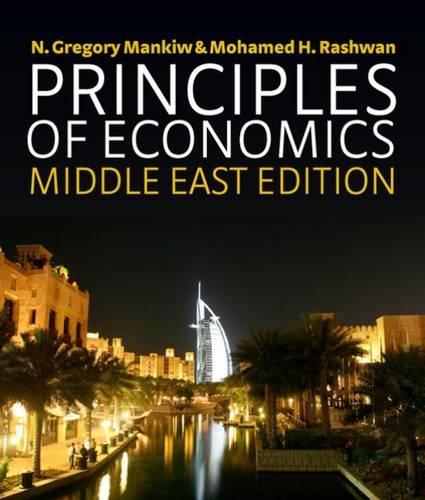 This Middle East adaptation of the sixth edition of N. Gregory Mankiw's "Principles of Economics" includes dedicated case studies, news articles and features focused specifically on the Middle East, integrated throughout the book. The features and content which made the US edition of the text so successful have been retained, including: the classic ten principles approach to economics - introduced in Chapter One and then referred to throughout the book designed to help build a framework for understanding; and, the rigour necessary to help learners develop the confidence to think like economists. "Principles of Economics: Middle East Edition" is essential reading for all students taking introductory economics modules on undergraduate courses throughout the Middle East and will be of interest to students from the Middle East studying in other parts of the world. It is also ideal for use with the economics component of MBA courses. This textbook is autopackaged with Coursemate. CourseMate brings course concepts to life with interactive learning, study, and exam preparation tools that support the printed textbook and the textbook-specific website. CourseMate includes an integrated eBook and interactive teaching and learning tools including quizzes, flashcards, videos, and more and an EngagementTracker, a first-of-its-kind tool that monitors student engagement in the course.

Mohamed H. Rashwan is an Assistant Professor of Finance and Economics at Zayed University in the United Arab Emirates. Dr Rashwan worked for the British University in Egypt (BUE) and recently he joined the Institute for Islamic World Studies (IIWS) at Zayed University in the United Arab Emirates. Dr Rashwan is the academic co-ordinator for the Master of Arts (M.A.) in Islamic Economics and Wealth Management provided by the IIWS for the first time in the Middle East and North Africa (MENA) region. Dr Rashwan has taught several courses in the field of finance, Islamic finance and economics at both undergraduate and graduate levels. Dr Rashwan is a regular contributor to academic and policy debates in economics. In addition to his teaching, research and writing, Dr Rashwan has been a consultant in the field of corporate and Islamic finance for more than ten years. N. Gregory Mankiw is Professor of Economics at Harvard University. He has taught macroeconomics, microeconomics, statistics, and principles of economics. Professor Mankiw is a prolific writer and a regular participant in academic and policy debates. His research includes work on price adjustment, consumer behavior, financial markets, monetary and fiscal policy, and economic growth. His published articles have appeared in academic journals such as the AMERICAN ECONOMIC REVIEW, JOURNAL OF POLITICAL ECONOMY, and QUARTERLY JOURNAL OF ECONOMICS and in more widely accessible forums including THE NEW YORK TIMES, THE WASHINGTON POST, THE WALL STREET JOURNAL, and FORTUNE. In addition to his teaching, research, and writing, Professor Mankiw has been a research associate of the National Bureau of Economic Research, an adviser to the Federal Reserve Bank of Boston and the Congressional Budget Office, and a member of the ETS test development committee for the advanced placement exam in economics. From 2003 to 2005, he served as chairman of the President's Council of Economic Advisers. In addition, he maintains a very popular blog for students of economics at http://www.gregmankiw.blogspot.com.

Part I Introduction 1 Ten Principles of Economics 2 Thinking Like an Economist 3 Interdependence and the Gains from Trade Part II How Markets Work 4 The Market Forces of Supply and Demand 5 Elasticity and Its Application 6 Supply, Demand, and Government Policies Part III Markets and Welfare 7 Consumers, Producers, and the Efficiency of Markets 8 Application: The Costs of Taxation 9 Application: International Trade Part IV The Economics of the Public Sector 10 Externalities 11 Public Goods and Common Resources 12 The Design of the Tax System Part V Firm Behavior and the Organization of Industry 13 The Costs of Production 14 Firms in Competitive Markets 15 Monopoly 16 Monopolistic Competition 17 Oligopoly Part VI The Economics of Labor Market 18 The Markets for the Factors of Production 19 Earnings and Discrimination 20 Income Inequality and Poverty Part VII Topics for Further Study 21 The Theory of Consumer Choice 22 Frontiers of Microeconomics Part VIII The Data of Macroeconomics 23 Measuring a Nation's Income 24 Measuring the Cost of Living Part IX The Real Economy in the Long Run 25 Production and Growth 26 Saving, Investment, and the Financial System 27 The Basic Tools of Finance 28 Islamic Finance 29 Unemployment Part X Money and Prices in the Long Run 30 The Monetary System 31 Money Growth and Inflation Part XI The Macroeconomics of Open Economies 32 Open-Economy Macroeconomics: Basic Concepts 33 A Macroeconomic Theory of the Open Economy Part XII Short-Run Economic Fluctuations 34 Aggregate Demand and Aggregate Supply 35 The Influence of Monetary and Fiscal Policy on Aggregate Demand 36 The Short-Run Trade-off between Inflation and Unemployment Part XIII Final Thoughts 37 Six Debates over Macroeconomic Policy