Items related to Harry Potter and the Philosopher's Stone: Signature... 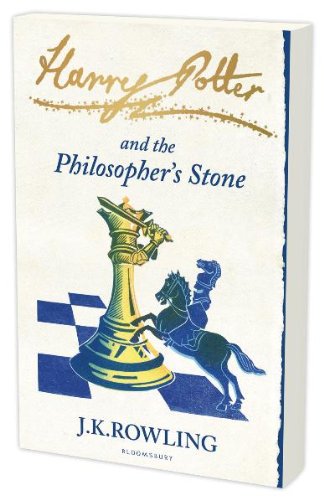 Harry Potter is an ordinary boy who lives in a cupboard under the stairs at his Aunt Petunia and Uncle Vernon's house, which he thinks is normal for someone like him who's parents have been killed in a 'car crash'. He is bullied by them and his fat, spoilt cousin Dudley, and lives a very unremarkable life with only the odd hiccup (like his hair growing back overnight!) to cause him much to think about. That is until an owl turns up with a letter addressed to Harry and all hell breaks loose! He is literally rescued by a world where nothing is as it seems and magic lessons are the order of the day. Read and find out how Harry discovers his true heritage at Hogwarts School of Wizardry and Witchcraft, the reason behind his parents mysterious death, who is out to kill him, and how he uncovers the most amazing secret of all time, the fabled Philosopher's Stone! All this and muggles too. Now, what are they?

The amazing popularity of Harry Potter and the Sorcerer's Stone means that now even Muggles know about the Leaky Cauldron, Diagon Alley, and Hogwarts School of Witchcraft and Wizardry. Whether or not you've read about Harry, this unabridged audiobook brings his world to life. Reader Jim Dale brings an excellent range of voices to the characters, from well-meaning Hermione's soft, earnest voice to Malfoy's nasal droning; from Professor McGonagall's crisp brogue to Hagrid's broad Somerset accent; and from snarling Mr. Filch to p-p-poor, st-tuttering P-Professor Quirrel. Some of the characterizations are peculiar--why do the centaurs have Welsh accents?--but that's a small price to pay to hear one of the myriad ways to sing the Hogwarts School song. Harry Potter fans of all ages--Muggle or not--will enjoy curling up with a few chocolate frogs, a box of Bertie Bott's Every Flavor Beans ("Alas! Ear wax!"), and this marvelous, magical audiobook. (Running time: 8 hours, 6 cassettes) --Sunny Delaney

The beloved first book of the Harry Potter series, now fully illustrated by award-winning artist Jim Kay. For the first time, J. K. Rowling's beloved Harry Potter books will be presented in lavishly illustrated full-color editions. Rowling herself selected artist Jim Kay, whose over 100 illustrations make this deluxe format as perfect a gift for the child being introduced to the series as for the dedicated fan. Harry Potter has never been the star of a Quidditch team, scoring points while riding a broom far above the ground. He knows no spells, has never helped to hatch a dragon, and has never worn a cloak of invisibility. All he knows is a miserable life with the Dursleys, his horrible aunt and uncle, and their abominable son, Dudley - a great big swollen spoiled bully. Harry's room is a tiny closet at the foot of the stairs, and he hasn't had a birthday party in eleven years. But all that is about to change when a mysterious letter arrives by owl messenger: a letter with an invitation to an incredible place that Harry - and anyone who reads about him - will find unforgettable.

1. Harry Potter and the philosopher's stone: 1/7

Book Description Bloomsbury Publishing PLC 2010-11-01, 2010. Paperback. Condition: Good. Item is in good condition. Some moderate creases and wear. This item may not come with CDs or additional parts including access codes for textbooks. Might be an ex-library copy and contain writing/highlighting. Seller Inventory # DS-1408812843-3