J. K. Rowling Hogwarts Library Boxed Set Including Fantastic Beasts and Where to Find Them 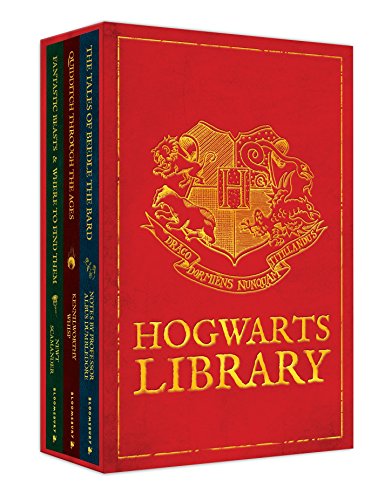 We are proud to offer the first boxed set of the complete Hogwarts Library, including Quidditch Through the Ages, Fantastic Beasts and Where to Find Them, and The Tales of Beedle the Bard. The books have been completely redesigned to form an elegant boxed set with colorful boards, headbands, footbands, and foil stamping.

Now, the classic books from the library of the Hogwarts School of Witchcraft and Wizardry-- Fantastic Beasts & Where to Find Them and Quidditch Through the Ages--are available in hardcover in a sturdy boxed gift set. (These books are written by J.K. Rowling herself under the pseudonyms Newt Scamander and Kennilworthy Whisp.) Finally, Muggles will have the chance to discover where the Quintaped lives, what the Puffskein eats, and why it is best not to leave milk out for a Knarl. The Quidditch textbook explains where the Golden Snitch came from, how the Bludgers came into existence, and why the Wigtown Wanderers have pictures of meat cleavers on their clothes. Both books, designed to look like Harry Potter's actual, used Hogwarts textbooks, feature silly scribblings from Harry, Ron, and Hermione. Proceeds from the sale of this gift set will go to improving and saving the lives of children around the world. Harry Potter fans, rejoice! (All ages)

Scholastic Inc.'s net proceeds from the sale of this book will go to Harry's Books fund established by Comic Relief U.K. to help disadvantaged children in the poorest countries of the world. J.K. Rowling is donating all royalties to which she would be entitled. The purchase of this book is not tax deductible. Comic Relief may be contacted at: Comic Relief, 5th Floor, 89 Albert Embankment, London SE1 7TP, England. Comic Relief in the United Kingdom is not affiliated with the organization of the same name in the United States.