Items related to A Monstrous Commotion: The Mysteries of Loch Ness

Williams, Gareth A Monstrous Commotion: The Mysteries of Loch Ness

A Monstrous Commotion: The Mysteries of Loch Ness 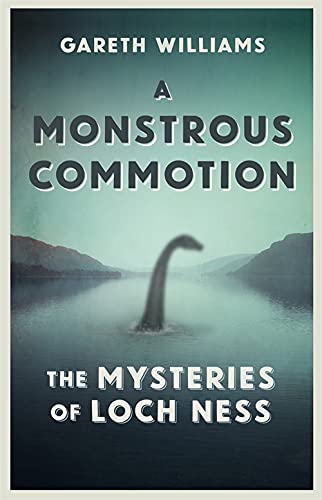 The Loch Ness Monster: a creature that should have died out with the dinosaurs, or a legend built on hoaxes and wishful thinking?

Sir Peter Scott, internationally renowned naturalist and president of the World Wildlife Fund, was convinced that the Monster existed. So were senior scientists at London's Natural History Museum and Chicago University; they lost their jobs because they refused to renounce their belief in the creature. For decades, the scientific establishment was determined to quash attempts to investigate Loch Ness - until Nature, the world's greatest research journal, published an article by Peter Scott featuring underwater photographs of the Monster. Drawing extensively on new material, Gareth Williams takes a wholly original look at what really happened in Loch Ness. A Monstrous Commotion tells the story as never before: a gripping saga populated by colourful characters who do extraordinary things in pursuit of one of evolution's wildest cards.

Meticulously researched and dazzlingly written, this book will appeal to anyone fascinated by nature and its mysteries - and to everyone who enjoys a beautifully crafted detective story with a strong cast of heroes and villains, plenty of twists and an unexpected ending.

Gareth Williams is Emeritus Professor and former Dean of Medicine at the University of Bristol. His previous books for general readers are Angel of Death: The Story of Smallpox (shortlisted for the Wellcome Book Prize of 2010), Paralysed with Fear: The Story of Polio and A Monstrous Commotion: The Mysteries of Loch Ness. He is a past president of the Anglo-French Medical Society and has an honorary doctorate from the University of Angers. He is often to be found playing the flute or saxophone in and around Bristol.

Williams is a staunch skeptic, but he has the good grace not to spoil the fun entirely. He is fascinated by the curious characters drawn to Loch Ness from all over the world; by the skulduggery and the hoaxes; and by the wacky methods employed by those hoping to capture the clinching piece of evidence.―RUPERT HAWKSLEY, SUNDAY TELEGRAPH

Williams gleefully exposes the bogus science, the warped facts, and the misunderstanding of evolution. Sifting the evidence, analysing the hearsay, showing the extent of the leg-pulling, he says that Nessie is no more than the action of the wind and the waves.―Roger Lewis, DAILY MAIL

Gareth Williams is the first to provide a non-partisan account of events at the loch ... Williams brings a dry wit and a scientist's illuminating perspective to the endless spectacle of Loch Ness folly. No one has written better about the great Nature debacle ... an entertaining and reasonably comprehensive account of this enduring animal myth―Ronald Binns, TIMES LITERARY SUPPLEMENT

Gareth William's excellent book isn't about the Loch Ness Monster; it's about the people who have looked for it.―Mark Mason, THE SPECTATOR

But does he exist? The author plays his cards close to his chest throughout this entertaining...book.―CRAIG BROWN, MAIL ON SUNDAY

1. A Monstrous Commotion : The Mysteries of Loch Ness

2. A Monstrous Commotion: The Mysteries of Loch Ness