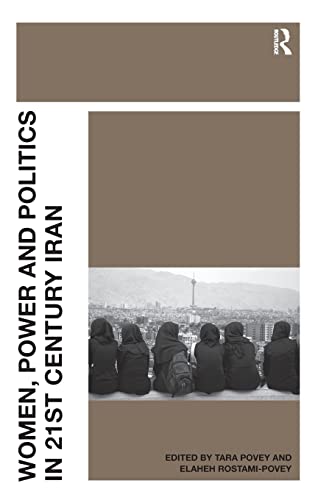 This book examines the women's movement in Iran and its role in contesting gender relations since the 1979 revolution. Looking at examples from politics, law, employment, environment, media and religion and the struggle for democracy, this book demonstrates how material conditions have important social and political consequences for the lives of women in Iran and exposes the need to challenge the dominant theoretical perspectives on gender and Islam. A truly fascinating insider's look at the experiences of Iranian women as academics, political and civil society activists, this book counters the often inaccurate and misleading stereotyping of Iranian women to present a vibrant and diverse picture of these women's lives. A welcome and unique addition to the vibrant and growing literature on women, Islam, development, democracy and feminisms.

'An original and necessary contribution, this volume taps into Iranian feminist voices rarely heard outside Iran, illuminates topics that have until now only been discussed fleetingly, and provides an urgent intervention into the debates about how women organise, mobilise and act in Iran. The volume's careful attention to various spheres of women's activity - from governance to journalism, employment, and the arts - is fascinating, provocative, and immensely useful.'
Laleh Khalili, School of Oriental and African Studies, UK

'This is a powerful analysis of women's movement in Iran by some of the best known post-revolutionary activists who have been instrumental in propelling the women's movement forward in Iran in the past three decades. Their lived experiences add an illuminating dimension to their rigorous political and historic overview. This is a book that is well worth reading by all scholars and others who are interested in the subject.'
Baroness Afshar, University of York, UK

'...The chapters are a serious insider's look by Iranian women researchers, and so embody the important argument that only Muslim women within their own contexts can 'save' themselves by themselves.'
Omaima Abou-Bakr, Cairo University, Egypt

'A fascinating insider's look at the experiences of Iranian women as academics, political and civil society activists, this book counters the often inaccurate and misleading stereotyping of Iranian women to present a vibrant and diverse picture of these women's lives... Iran and the West have had a frayed history, and contributing to this is a lack of engagement from Western academics with those writing from Iran. In this unique new book, the authors present a counter argument to many Western assumptions of issues concerning women in Iran. This is the first time a book has been written by Iranian women in English, and it skilfully uses a wide range of narratives to present the different experiences of women in Iran (p194)... This book is one full of rich examples of the dynamism of contemporary Iranian women's activism and contributes fruitfully to debates on gender and Islam. The book's strength is definitely its ability to be interdisciplinary and use a wide range of narratives.'
LSE Review of Books

'The strength of this collection is its focus on Iranian feminism from an insider's perspective; it is a valuable source of locally generated information on women's achievements and struggles.'
Feminist Review

'Women, Power and Politics in 21st Century Iran provides an informative insight on the factual status of women in Iran and shows that this is not very different from the challenges facing women around the world with regard to religion and patriarchal suppression. The book thus debunks Western views of Middle Eastern women in particular and provides a conclusive view that Islamic and Western conceptions of feminism can draw lessons from each other. Providing a conclusive view, Tara Povey posits that doing so would establish a global vision of feminism useful to all in the struggle for their identities and those of their communities.' --Political Studies Review