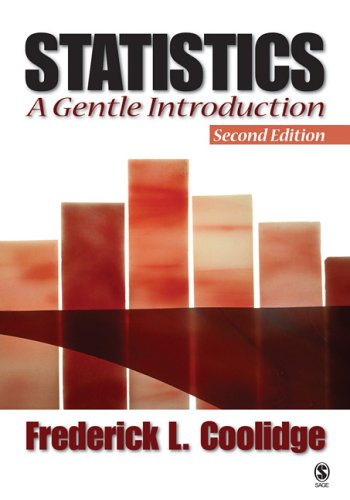 Doing statistics for the first time? Don’t panic! In this introductory text, author Frederick L. Coolidge shows how statistics needn’t be difficult or dull. The Second Edition of Statistics: A Gentle Introduction is specifically designed to reduce students’ anxieties and minimize unnecessary formulas while providing a comprehensive review of basic statistical designs and analyses through the use of interesting, real world examples.

Frederick L. Coolidge (Ph.D.) received his B.A., M.A., and Ph.D. in Psychology at the University of Florida. He completed a two-year postdoctoral fellowship in clinical neuropsychology at Shands Teaching Hospital in Gainesville, Florida. He has been awarded three Fulbright Fellowships to India (1987, 1992, and 2005). He has also won three teaching awards at the University of Colorado (1984, 1987, and 1992), including the lifetime title of University of Colorado Presidential Teaching Scholar. In 2005, he received the University of Colorado at Colorado Springs College of Letters, Arts, and Sciences’ Outstanding Research and Creative Works award. Dr. Coolidge conducts research in behavioral genetics and has established the strong heritability of gender identity and gender identity disorder. He also conducts research in lifespan personality assessment and has established the reliability of posthumous personality evaluations, and also applies cognitive models of thinking and language to explain evolutionary changes in the archaeological record.

"Designed specifically for those who are learning or using statistics for the first time, this text pays relatively little attention to unnecessary formulas while providing a basic overview of basic designs and analyses through real-world examples. Updating his text to include new information, particularly on ANOVA and confidence levels and limits, Coolidge actually is quite gentle introducing undergraduates to the basics. . . " (SciTech Book News)