Items related to Making Sense of the Social World: Methods of Investigation

Making Sense of the Social World: Methods of Investigation 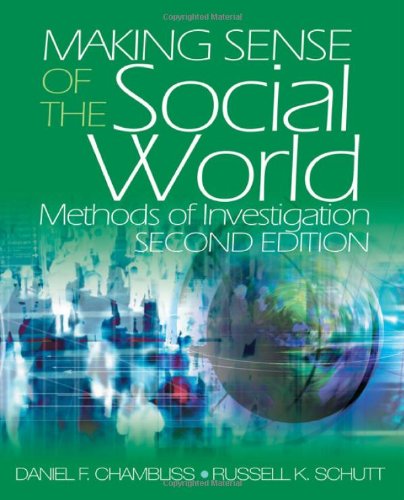 In this Second Edition of the bestselling Making Sense of the Social World: Methods of Investigation, authors Daniel F. Chambliss and Russell K. Schutt once again provide students with an engaging, innovative, and accurate introduction to social research. More than a brief derivative of Schutt′s widely successful Investigating the Social World, this version is written in a less formal, occasionally humorous style, with more concise examples drawn from everyday experience, and less coverage of complex or more rigorous methods.

Daniel F. Chambliss, PhD, is the Eugene M. Tobin Distinguished Professor of Sociology at Hamilton College in Clinton, New York, where he has taught since 1981. He received his PhD from Yale University in 1982; later that year, his thesis research received the American Sociological Association’s Medical Sociology Dissertation Prize. In 1988, he published the book Champions: The Making of Olympic Swimmers, which received the Book of the Year Prize from the U.S. Olympic Committee. In 1989, he received the American Sociology Association (ASA)’s Theory Prize for work on organizational excellence based on his swimming research. Recipient of both Fulbright and Rockefeller Foundation fellowships, he published his second book, Beyond Caring: Hospitals, Nurses, and the Social Organization of Ethics, in 1996; for that work, he was awarded the ASA’s Elliot Freidson Prize in Medical Sociology. In 2014, Harvard University Press published his book, How College Works, coauthored with his former student Christopher G. Takacs. His research and teaching interests include organizational analysis, higher education, social theory, and comparative research methods. In 2018, he received the ASA’s national career award for Distinguished Contributions to Teaching.

3. Making Sense of the Social World: Methods of Investigation