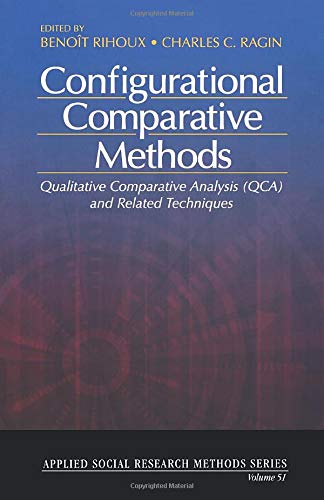 Configurational Comparative Methods paves the way for an innovative approach to empirical scientific work through a strategy that integrates key strengths of both qualitative (case-oriented) and quantitative (variable-oriented) approaches. This first-of-its-kind text is ideally suited for "small-N" or "intermediate-N" research situations, which both mainstream qualitative and quantitative methods find difficult to address. Benoît Rihoux and Charles C. Ragin, along with their contributing authors, offer both a basic, comparative research design overview and a technical and hands-on review of Crisp-Set QCA (csQCA), Multi-Value QCA (mvQCA), and Fuzzy-Set QCA (fsQCA).

A must for any student or researcher who wants to engage in systematic cross-case comparison in the social and behavioral sciences, the book is ideal for use in upper-level undergraduate and graduate-level social science research methods courses.

"This splendidly original work . . . will become an epistemological landmark appreciated by many different schools of thought that have wrestled with the methodological problems Ragin raises and answers."--Daniel Chirot, University of Washington

"Charles Ragin has produced a well-argued and highly provocative contribution to the growing literature on methods of comparative and historical sociology. While not everyone will agree, all will learn from this book. The result will be to intensify the dialogue between theory and evidence in comparative research, furthering a fruitful symbiosis of 'quantitative' and 'qualitative' methods."--Theda Skocpol, Harvard University

Charles C. Ragin spent most of his youth in Texas and the southeastern United States. He attended the University of Texas at Austin as an undergraduate and received his BA degree in 1972 at the age of 19. That same year he began graduate work in sociology at the University of North Carolina at Chapel Hill and received his PhD in 1975. From 1975 until 2001, he lived in the Midwest, teaching first at Indiana University and then at Northwestern University. He headed west in 2001, where he spent just over a decade at University of Arizona-Tucson. In 2012, he joined the faculty at the University of California-Irvine, where he is currently the Chancellor′s Professor of Sociology. He is best known for developing a methodological alternative to conventional research methods, using formal set-theoretic techniques for comparative research. His many publications address broad issues in politics and society, with topics ranging from the causes of ethnic political mobilization to the shaping of the welfare state in advanced capitalist countries. He has written several books including Intersectional Inequality: Race, Class, Test Scores and Poverty (with Peer Fiss, 2017). Redesigning Social Inquiry: Fuzzy Sets and Beyond (2008) Fuzzy-Set Social Science (2000). His book The Comparative Method: Moving Beyond Qualitative and Quantitative Strategies (1987) won the 1989 Stein Rokkan Prize of the International Social Science Council of UNESCO. In 2014 he received the Paul F. Lazarsfeld Award of the American Sociological Association. He is married to Mary Driscoll, and they have two sons, Andrew and Daniel.