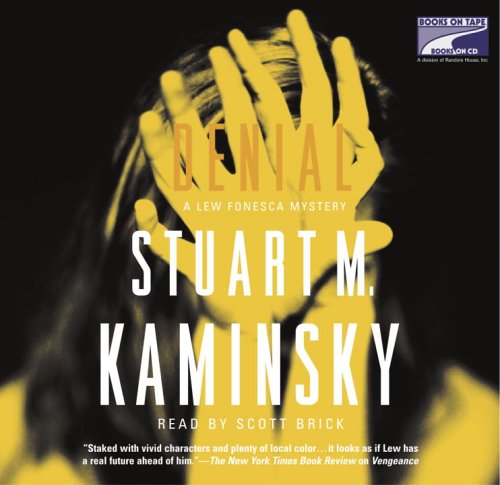 Lew Fonesca has a lot on his plate these days, and he doesn't want any of it. Still grieving from the death of his wife four years earlier, he's learned to survive by pretty much leaving the world alone, and wishing the world would do the same to him. Still, he has to earn money for food and the two rooms he rents behind the Dairy Queen. Lou's a process server who's good at finding people. In fact, he's developing a bit of a reputation, so it's no surprise when an actress asks him to find the driver who ran down and killed her fourteen-year-old son. The same week, a senior in a retirement home asks him to find out who was murdered down the hall from her. There isn't a body and all residents are accounted for, so no one believes her. But Dorothy knows what she saw, and she wants Lew to prove it. Stuart M. Kaminsky's DENIAL is a sad, elegantly told story about learning to live with loss. It's also about the quest for closure and, for a lucky few, maybe even redemption. Despite Lew's depressed, lethargic nature, I liked this character a lot. He tries to do the right thing, doesn't have a temper or violent streak, and doesn't wish harm on the world, except perhaps the driver who killed his wife. But since he doesn't know who this person is, he thinks about it as little as possible. This interesting story offers well-drawn characters, perfect pacing, and a great blend of dialogue and narrative description. What I loved most about this book, though, is Kaminsky's simple, exquisite style. Absolutely terrific. ( Amazon customer)

Book Description Audio CD. Condition: Good. Item is in good condition. Some moderate creases and wear. This item may not come with CDs or additional parts including access codes for textbooks. Might be an ex-library copy and contain writing/highlighting. Seller Inventory # DS-1415921873-3