Items related to Princess Labelmaker to the Rescue! (Origami Yoda #5) 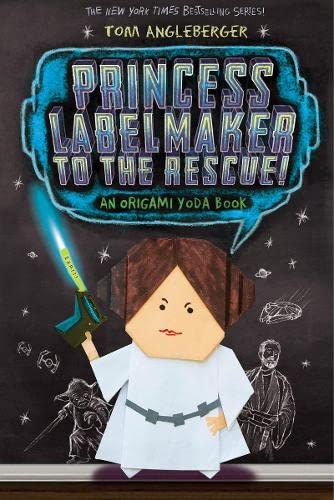 At McQuarrie Middle School, the war against the FunTime Menace—aka test prep—wages on. Our heroes have one battle under their belts, and they’ve even found a surprising ally in Jabba the Puppett. But to defeat the Dark Standardized Testing Forces they’re going to need an even bigger, even more surprising ally: Principal Rabbski. But with great forces—aka the school board—pushing her from above, will the gang’s former enemy don a finger puppet and join the Rebellion—or will her transformation to Empress Rabbski, Dark Lord of the Sith, be complete? With this timely episode in the blockbuster Origami Yoda series, Tom Angleberger, author of Star Wars: Return of the Jedi: Beware the Power of the Dark Side, demonstrates once again that his “grasp of middle-school emotions, and behavior is spot-on” (Scripps Howard News Service).
Praise for Princess Labelmaker to the Rescue!
"Fans will devour this satisfying and nicely realistic conclusion to the story set up in the previous volume. Characters grow, and non–Star Wars pop-culture references seep in. Readers new to the series are advised to go back to the beginning; they won’t regret it."
--Kirkus Reviews

"These books are more popular than a working droid on Tatooine. Expect the usual army of young Jedis to come out swinging for a copy."
--Booklist

Tom Angleberger is the author of the bestselling Origami Yoda series. He is also the author of Horton Halfpott and Fake Mustache, both Edgar Award nominees, and The Qwikpick Papers: Poop Fountain! Tom maintains the Origami Yoda–inspired blog origamiyoda.com. He is married to author-illustrator Cece Bell and lives in Christiansburg, Virginia.

At McQuarrie Middle School, the war against FunTime (the euphemistically named standardized test-prep program) continues, but it seems the Origami Rebel Alliance’s previous victory may be short-lived. Despite Principal Rabbski’s promise to replace FunTime with extracurriculars, it’s still being shown in class! Desperate times call for desperate measures, and someone has decided to take matters into his or her own hand puppet. Princess Labelmaker makes her daring debut by stealing the rebels’ secret case file and giving it to the principal, an act that could prove their salvation or their demise. Plastered with Labelmaker’s commentary, the latest file offers insight into the nobility of the rebels’ cause and the self-serving designs of FunTime’s creators. This continues the characteristic spirit and humor readers have come to expect of the Origami Yoda series. In what may be their greatest challenge yet, Angleberger puts the Alliance to the test in more ways than one. But perhaps the greatest mystery of all is this: Just whose hand is behind Princess Labelmaker? HIGH-DEMAND BACKSTORY: These books are more popular than a working droid on Tatooine. Expect the usual army of young Jedis to come out swinging for a copy. Grades 4-6. --Julia Smith

4. Princess Labelmaker to the Rescue (Hardback or Cased Book)

10. Princess Labelmaker to the Rescue! (Hardcover)

Book Description Hardcover. Condition: New. Hardcover. At McQuarrie Middle School, the war against the FunTime Menace-aka test prep-wages on. Our heroes have one battle under their belts, and they've even found a surprising ally in Jabba the P.Shipping may be from multiple locations in the US or from the UK, depending on stock availability. 208 pages. 0.340. Seller Inventory # 9781419710520